I found a great little book in my library called The Private Life of the Queen, which was first published in 1897.

It was written by ‘one of the Queen’s servants’ and when I looked at the index, I was quite excited to see a chapter called “The Queen’s Pets”. It was going to be good fun to read about Queen Victoria and her albinos!

Well, I read how the Queen loved almost all animals. 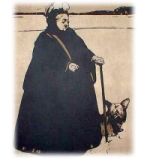 I found out the names of practically all her dogs, from Skye terriers to Dachsunds …

that she had long-haired white Canadian pigs and lots of different birds, including two huge eagles …

plus the fact that she rescued a little fawn from the bottom of a disused gravel pit and took it back to the Castle, naming it Victoria.

But there was zilch about ferrets, albinos or otherwise!

I checked out the chapter about “The Queen’s Fads and Fancies” to see if her fads might have included ferrets.

I then looked through “The Queen’s Fortune and Expenditure, Her Charities and Gifts” as I had read that she gave albinos in fancy cages away to foreign dignitaries.

But I did learn that she bought a poor beaten donkey called “Jacko” from his cruel Niçois master.

There wasn’t a whiff about Queen Victoria having ferrets, albino, sable, or any other color.

So … I would love to know where the information came from.

If anyone knows where I can find proof about Queen Vicky having ferrets, please email me and let me know.

I would love to believe the story but at the moment, it seems to me that it’s a myth busted.

In Victoria’s day, ferrets used to cost 3s 6d, which was the same price as a little kitten.

Return from Queen Victoria and Ferrets to All About Ferrets

2 thoughts on “Queen Victoria and Ferrets”