The Latin word “poecilogale” is in fact made up of two words – poecilo, a Latin prefix for an old Greek word “poikilos”, which means spotted, and gale, another old Greek word for pole cat; marten or weasel.

Albinucha is Latin and means white nape, so I guess we could say that the African striped weasel is actually Spotted Weasel White Nape 😀 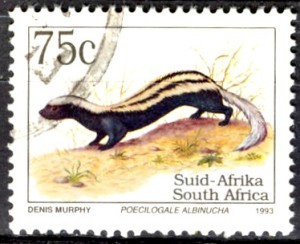 The African striped weasel is long and sleek, has very short legs and is the smallest carnivore in Africa.

The animals are black and white and have a white patch on top of their head, which looks like a maid’s cap 😉 That white cap splits into 3 lines which run down their back and join at the base of their tail and turns into a grey tail.

Their fur reminds me of a Greater Grison with that cap on its head, and it also looks very similar to a zorilla but has the sleek build and the slinky gait of a weasel.[wp_ad_camp_2]

The mating process between striped weasels is much like that of ferrets – pretty violent with lots of growling and boys throwing the girls around 😮 However, unlike ferrets and many other mustelids, the girls don’t exhibit delayed implantation.

Gestation is just 30 days ± and litter usually consists of 1-3 kits. The females only have one litter a year but if they lose the first litter, they’ll mate again so that they produce a 2nd litter. The females have two pairs of mammae.

Kits are born hairless and only open their eyes when they’re 7 weeks old. They’re weaned at 11 weeks, know how to kill prey when they reach 13 weeks and are fully grown at 20 weeks old.

One website I checked stated that young females usually have their first litter when she reaches her 19th month but young males only become in rut when they’re 33 months old, whereas a pdf I read (see below) said that both males and females reach sexual maturity when they’re 8 months old. :/ 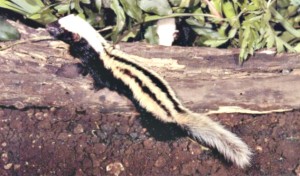 Like other mustelids, the striped weasel is a carnivore but, according to a research paper by Serge Larivière, published by the American Society of Mammalogists in 2001, the weasel feeds “almost exclusively on rodents up to its own size”.

No scientist could say how long a striped weasel lived in the wild but one couple in captivity was still living when they were 6 years old.

African striped weasels can be found in the forests, grasslands and marshy areas of sub-Saharan Africa.

How to say “African Striped Weasel” in other languages

Return from African Striped Weasel (Poecilogale albinucha) to All About Ferrets