There are many things to learn about our favorite pet, the ferret – aka Mustela putorius furo – so this page should be your one-stop place to find out everything unusual, as and when I come across information.

For instance, if you’re interested to learn what Mustela putorius furo means in English, when ferrets were first used for hunting rabbits (ferreting), which old English university forbade their students from having ferrets, etc, you’ve come to the right page.

And there are also fascinating stories about the ferret’s cousin, the weasel, at the bottom of this page, so check those links out too  😀 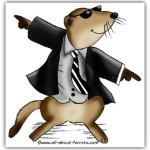 How to Say Ferret in Other Languages

Folklore and Olden Day Cures Regarding the Ferret

The Collective Noun for Ferrets

There are a surprising number of ways to spell a “business of ferrets”!

The Persians sent a ferret to China as a gift … and did the Egyptians really have ferrets? I thought not until I found some other references about ferrets in Nubia

Ferrets in the Middle Ages

Find out which English college had rules saying no ferrets allowed and and what Nicholas Hiliard used a ferret’s tooth for …!

See what the 1771 edition of the Encyclopaedia Britannia had to say about mustelids!

Did Queen Victoria actually give ferrets away to visiting dignitaries, like some people claim, and how much did they cost …?

Ferrets have done a lot to help us in this day and age, including cheering up sick kids!

Ferrets in the Pears Cyclopaedia

Ferret Races … apparently it originated in Libya back in Herodotus’ day where they had racetracks (galeaidromos) built for ferrets!?!

Feeding Ferrets in the 1880s

I am amazed that ferrets survived in England during the 19th century after reading about the awful diets they were fed!

Return from Total Ferret Information to All About Ferrets