Have you asked yourself “What kind of ferret should I get?”

I think you’ve come to the right page  😀

What should I get???

A Big Boofy Boy or A Slim Delicate Girl?

Obviously if you want ferrets to use for ferreting, you might want to think about getting a girl, as they tend to be slim and lithe and would be the best for flushing rabbits out of their burrows. 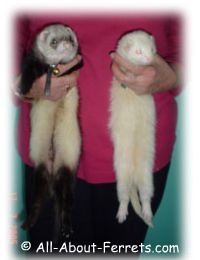 As you can see from the above picture, Muis, our albino girl, is narrower and shorter than Otis.

I have no favorites — I love having boys because there’s more of them to cuddle. However some boys don’t enjoy cuddling while some of the girls love just lying in your arms all day if possible. It all depends on the temperament of the ferret.

Boys cost less to sterilize but they might have bigger appetites than a girl, so would cost more to feed in the long run.

Here you can perhaps get a better idea of sizes. The boys are opposite each other in the middle, with the girls on either side of them.

Kits can be a handful, they sleep less, are pretty boisterous and extremely curious.

They’ll be into everything and you’ll need to watch out to make sure they don’t get out or get stuck in odd places which haven’t been ferretproofed properly. 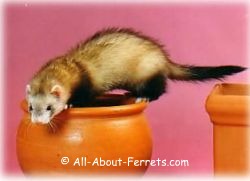 But if you get an older ferret – again, depending on personalities – you might find him or her far more sedate and laid back, like our super first male Chucky — we should have called him Mr Supercool Dude! 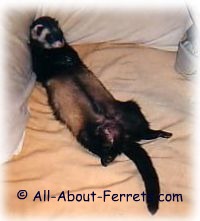 If you’re a first-time ferret owner, I would suggest calling up the ferret society in your state (for Sandgropers that’ll be WAFFS) and speaking to someone on the committee. They are all ferret fanatics and would give you lots of information.

For you other Aussies, please check out the page with a list of all the Aussie Ferret societies listed for one in your state.

You’ll probably find that the committee members would be more than happy to let you go over and check out their ferrets so that you get hands-on experience and are able to see if they really are the pet you want for yourself.

Becoming a member of the ferret society would be a great idea because you could mix with like-minded people at all the functions and learn a whole lot about these special little animals firsthand from people who know what they’re talking about.

Where Should You Get Your Ferret From?

If you’re a first time ferret owner, then the best thing would be to become a member of the ferret society as quite often, they have ferrets which need to be rehoused.

Although it might not be possible to know the exact background of that particular ferret, they certainly would know if it was a zany ferret (like Kaos) and therefore unsuitable for new owners, or whether it was a placid, calm ferret, which would be ideal.

I would imagine the new American ferret owner could go to a shelter and talk to people there about the ferrets in their care and see which one would be the suitable.

Seems like a win-win situation, with the ferret getting a loving home and the new owner getting a ferret well suited to his particular lifestyle.

If you’re getting a ferret from a pet store or through the papers, look for:

a nice, clean bottom under its tail 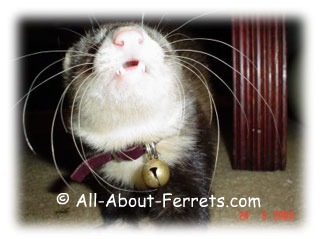 Should You Get More Than One Ferret?
Ferrets are gorgeously gregarious little animals and I believe 2 ferrets would be happier together than just one on his own. However that’s entirely up to you.

Imagine coming home to seeing a sad little fellow who’s been left alone all day with no one to play with …..

…. instead of a drawer full of snoring weasels who’re completely exhausted after causing chaos and mayhem around your house all day! 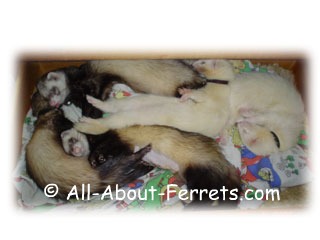 BTW, the photo of CJ looking out from the drawer was taken before his friends woke up in the same drawer 😀 He certainly wasn’t a lonely only ferret!

But what happens if you already have one ferret and wish to get another?

It should be fine but, as always, it depends on your ferret’s personality.

Some ferrets welcome newcomers with open arms — you can almost imagine them saying “mi casa es su casa” as they put their arm around the new ferret and show them around the house.

Others will narrow their eyes when they first meet them and you can just see their minds working overtime on how they can jump the intruder and shake the living daylights out of them!!

With ours, the boys have all been extremely friendly to new boys and girls, while some (not all) of the girls have been nice to some girls and completely beastly to others.

Kaos was fine when Snoopy joined our family but when Muis came, all hell broke loose.

Both Kaos and Snoopy were horrible to her and used to take every opportunity to jump on her and bite her. It got so bad that I had to go to the vet to get something to put onto Muis’ neck that would taste foul and stop the two old harpies from picking on her.

It lasted around 7 days and finally they accepted her into the fold.

Strangely enough they also were a bit unpleasant to Kahlua when she came to live with us and that surprised me, as she was only 7 weeks old and I thought they’d act motherly towards her.

If you have that problem, just get some Bitter Apple or something similar to put on the neck of the ferret that’s getting beaten up and let them sort themselves out.

It’s not nice when the newcomer gets picked on but it doesn’t last and once they all know exactly where they all stand, peace reigns.

But even now occasionally I catch Muis giving Kaos a hard time, as if it’s payback for when she was on the receiving end!

As I’ve said throughout this site, if you get a ferret you must be prepared to treat it like one of the family and look after it during the good times and the bad.

Just because they’re small and sleep a lot, it doesn’t mean they should be locked up in their cage 24/7 because you’re too busy to interact with it.

Don’t even think of getting one if that’s a possibility. Seriously!!

You can read a sobering story about three ferrets which were dumped by their owners and how they ended up in shelters here.

It made my heart ache to read about how they were treated by their original owners but thank goodness they ended up in a safe environment.

I will say it again … do not get a ferret unless you are prepared to make it a part of your family for life – for better or for worse, in sickness and in health.

Go to a shelter and talk to the people there.

Hold a ferret and get to know what they’re like as pets before you actually get one so that if you decide to get one, you will know exactly what you’re getting into!