by Misty Greyeyes
(Surrey, BC, Canada) 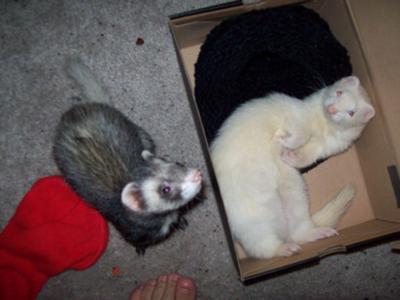 (present had as a pet) Reizo & Annabella 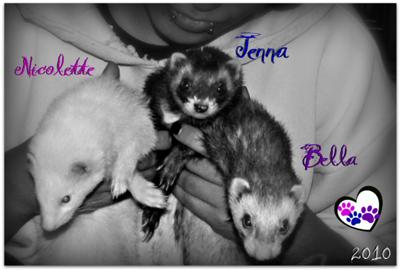 When I was 14 years old I saw ferrets for the first time and I knew I wanted a ferret as a pet.

Long ago I had a five ferrets, and babysitting too (with four males with my three ferrets, wow!) Three females chasing the male ferrets who are hiding from my female ferrets!

Later my three passed away. I know that’s really sad but they went in peace without pain.

Then I saved a ferret who was about 1 years old from the SPCA who were going to put him to sleep. I took him to my home but, wow, he made my bedroom messy because he was just a year old (NAKO or NEKO).

My three female ferrets were Nicolette(4 years old), Bella (5 years old), and Jenna (3 years old). They knew that I loved them, same thing they’re loved me.

I’m thinking about buying another but my parent says no, but I’ll buy one in summer.

I’m going show everyone that ferrets are not rats!