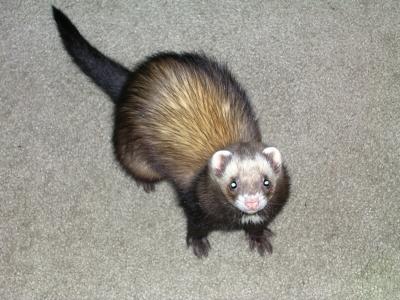 Bandit was our sable Mac Daddy. He lived for a year at a Petco with his brother Angel.

Like with his brother, it was love at first sight. We took them home to live with our first fuzzy, Neo.

Bandit crossed over the rainbow bridge March 3, 2008. He had been ill since Christmas and had several surgeries. He was a fighter and held on for a long time, but it just got to be too much for him and he let us know it was time. We just weren’t expecting it so soon.

I guess we never do, but we were relieved for him to be released from his pain and sickness. He was also a free and gentle spirit, a loving baby who gave tons of kisses, a true Mac Daddy with the baby girls, and loved to play “lick, lick, chomp!” and playing with his family.

We miss him and are happy that he is healthy and bouncing again, playing with his brother Angel, who crossed the bridge May 2, 2007.

We know we’ll see our Banditbean again some day. We love you, Bandit!