Ferrets don’t have different blood groups so it’s possible for any healthy ferret to donate blood; however males are usually the preferred choice of donor as they are larger.

Ferrets can safely donate 1% of their body weight so, for example, a large ferret weighing about 900g can donate around 9mls of blood.

I know when Scully was hemorrhaging, the vet asked me to get Chucky as they were going to try and transfer blood from him to her but for some reason they chose not to do that at the last minute. 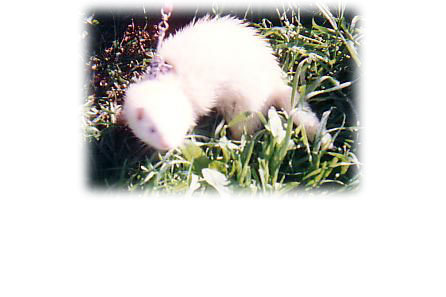 Philip had gone to pick up the kids from Army Cadets and I was just watching TV when I saw Scully run through the room, looking very distressed.

I tracked her down and was horrified to see that she was hemorrhaging, so I called the 24-hour vet, told them I was bringing her down and rushed out shoeless.

At the vet they thought Scully was either suffering from aplastic anemia, which I knew she wasn’t since she wasn’t in heat, or that she had eaten some rat poison and that was making her bleed out.

Rat poison? I couldn’t imagine how she could have got to any rat poison, as we had never in our lives used rat bait either in or out of our house. And then it hit me … just a few days earlier I had the dishwasher man in to repair our machine and he had to take it to his workshop.

He pulled the machine out from the cabinet and there was a small black object that I swept out from the empty space. I had no idea that it was rat bait so just left it with the rest of the mess from under the dishwasher. Scully had been scratching at the door to come into the kitchen so I opened it before sweeping the mess up. She must have ingested some of the rat bait before I removed it  😮

The vet thought he might be able to do a blood transfusion, so I rushed back home to get Chucky, our biggest ferret, but when I got back they decided they’d just try the blood clotting medicine.

Philip and the kids rolled up at the vet’s. They had gone home, found the place empty and saw the blood soaked towel, so presumed the worst had happened to a ferret.

We left the vet around 11pm and I have never prayed so hard, but my prayers weren’t answered. The vet called at 12:30am to say Scully had lost her fight. The whole family cried after that phone call.

She was our first ferret to die and the pain still lingers when I think about her.

It was a terrible, terrible experience and I would have joyfully paid the earth to get Scully back healthy and well, but it didn’t have a happy ending.

Assessment of a blood preservation protocol for use in ferrets before transfusion (Vet Record, BMJ Journals)