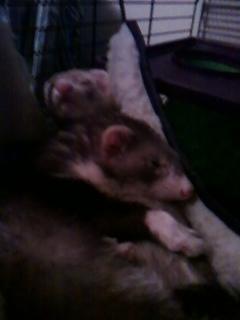 I got my ferrets at the end of October. They were eight weeks when I bought them and as they get older, the more devious and whittier they became.

As far as ferret proofing I can’t say I’ve done the best job, but they’ve never got lost inside my bedroom or got a hold of anything that was not allowed. My biggest lesson on them though is you must constantly be WATCHING.

In the same day I lost both. I was taking them outside on their leashes and in a mad dash Charlie escaped his harness as i was walking out the door. I scooped Dee up and went inside. While my cats are terrified of them I would not put it past them to eat one if they had the chance. I could not find him and once I looked in the yard I saw both the cats and new he was safe. I took Dee out and in her great escape she stuck around so I gave her trust she wouldn’t run off. I saw my cat getting in hunting mode so I went over to her and by the time I turned my head back she was gone. I discovered her under the deck. She didn’t not come out for at least twenty minutes returning with a mud filled face and nose.

In my adventure I remembered one thing, my ferrets are fatties. I pulled out their food and out they came. Charlie was in the laundry room in the basement. We stick to the bedroom now.