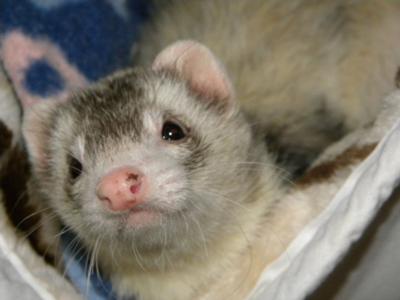 Corby hanging out in his hamock

Corby was such an adorable and sweet ferret. He was outspoken and let me know when he wanted something. He was the last of my three musketeers. Hazel and Paris proceeded him in death.

Last year he had surgery for adrenal disease and everything went very well. However, after we took him off of the medications he became hypoglycemic. He had insulinoma. That was an ongoing battle. His blood sugar would drop very easy. He did great for a long time with only a few major episodes but his adrenal tumor came back.

I finally had to help him to the rainbow bridge this weekend. He passed on February 20, 2011, only two weeks after his sixth birthday.

I will miss my little old man. 🙁