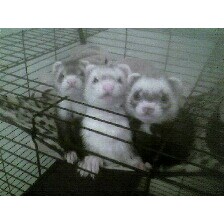 My little buddy Emo the ferret passed away today. He was only 1 years 7 months old. He left behind his older brother and sister ferrets who were very fond of him. This is still breaking my heart and I haven’t quite accepted that this happened.

I’m a seasoned ferret owned for now 11 plus years, and I love them. I’m a returned college student trying to make it in a different career path, and living an apartment near my college.

I picked this apartment for 3 reasons. Location to college, accepted pets, and super ferret proofed! The cabinets all close inside (no lip hanging out for paws to grab open) the baseboards were all sealed, every corner was closed off.

I did have some trouble with my little girl who likes to find places she can escape everyone, getting into the oven, but we sorted it out – once I unscrewed the top and could grab her each time she tried to nest in the insulation.

Emo was the newest addition to the family, brought in by my girlfriend and then adopted by me. He lived in this apartment accident proof for 1 full year. So all the careful ferret proofing paid off. I’m very paranoid with my ferrets but I did allow them to run around the apartment mostly. I recently got a job working as security for a boxing event, and after the job was done came home more tired then normal, due to a late working time of 1 am. I usually make sure to see all my ferrets before going to sleep.

To make this long story short I feel asleep without seeing my ferrets and when I woke up at 10 am, I went out seeking my buddies and figured they were hiding in my closet where they usually snuck into, even though I tried to keep them out of there. One of the heavy glass sliding closet doors had been broken when I first moved in and sat against the other door in a sorta v shape from the side. This allowed the ferrets to sneak in all though I didn’t want them in.

This morning I found Emo stuck in between the v shape made by the closet doors. I quickly picked him up thinking he was temporarily stuck, and found him cold to my touch. Screaming “No no no!” over and over woke my gf up as I easily removed him only to see he had the v shaped mark in the middle of his body. His tail was fluffed out as if he was scared and he was dead.

If I had woken up earlier I might have caught this, or if I had made sure to check on them before sleep I could have gotten him out of the closet before he got stuck coming out himself.

I thought I had done everything possible to make this a safe place for them, and I’m devastated that I failed him, and slept through any possible detection of his trouble. He was in the room next to where I was sleeping. I had no idea that this was a danger, as they traversed this obstacle many times.

I feel so guilty for the change in my very steady routine that helped this one time freak thing allow itself to destroy the best buddy a guy could ask for.

I don’t really know what else to say. I hope that this never happens to anyone else, and thank you for at least reading this, I miss him so much, and the other ferrets didn’t even recognize him when he was in front of them dead, they passed him and searched everywhere else for the real (living) him. I never knew that this could be so dangerous and am beating myself up for not having thought about it sooner.

Emo is the ferret on the right in the picture and will always be in my heart.