The European mink is similar to a ferret in that they have long, lithe bodies, short legs and a short tail.

They have rich dark brown, almost black, fur which is luxuriously thick, and a distinctive small band of white fur around both the upper and lower lips. Their undercoat is water-repellent. There are also some European minks which have white markings on their throat, chest and stomach as well.

Foundation “Lutreola”
These markings around their mouth are what distinguish the European mink from the American mink (Mustela vision) but despite their similar appearance, the two species of minks are not closely related.

They are semi-aquatic and their partly webbed feet help them to swim and dive, as well as to hunt underwater. However their eyesight isn’t particularly adapted to seeing underwater so they tend to rely heavily on their sense of smell when seeking food. 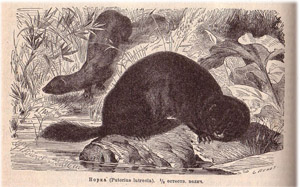 Males and females look very similar but, like with most mustelids, the males are much larger.

Mating usually takes place from February to March and the kits are born in April and May.

The kits open their eyes around 4 weeks old; baby teeth appear within 15-17 days and then are replaced by adult teeth when they kits are 60-72 days old.

The kits are weaned by 10 weeks and start going out on their own when they reach 3-4 months old.

The European mink can live to at least 6 years in the wild. Captive minks have been known to live up to 12 years.

Back in the early 20th century, Mustela lutreola was a common sight throughout the European continent. Now it’s considered the most endangered carnivore in Europe.

It used to inhabit a huge area from the Ural mountains to eastern Spain, and from central Finland to the Black Sea. At present there are only isolated populations to be found in one-fifth of its former range.

Experts can’t be sure what caused the decline in population but think some of the contributing factors include the introduction of the American mink, a reduction in suitable habitat thanks to humans and over-hunting.

Being semi-aquatic, the European mink lives in the densely vegetated banks of creeks, rivers and lakes and is rarely found more than 100m from fresh water. 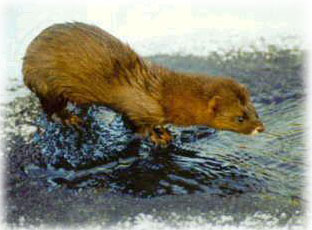 If it doesn’t make its own burrow, it may take one from a water vole or establish a den in a sheltered location among tree roots.

The European mink is a carnivore.

Some interesting videos about European Minks …

How to say European Mink in different languages

Ferret Center This site talks about the “Khonorik”, which is a hybrid of the polecat and European mink

You can download an old (1995) pdf entitled “Why is the European Mink (Mustela lutreola) disappearing? – A review of the process and hypotheses” HERE.

Return from European Mink (Mustela lutreola) to All About Ferrets