I have always thought that the word “races” wasn’t quite the right one. Ferret “meanderings”, ferret “sniff and back up” or even ferret “fall asleep in the pipe” day might be more suitable

No, I’m just kidding around.

The races are good fun but my ferrets have never found the need to actually race through the pipes and come out the other end as winners or even runners up. They used to stroll down, sniffing at all the smells left by previous ferrets and Fidget even managed to turn around in the pipe and come back out through the entrance. 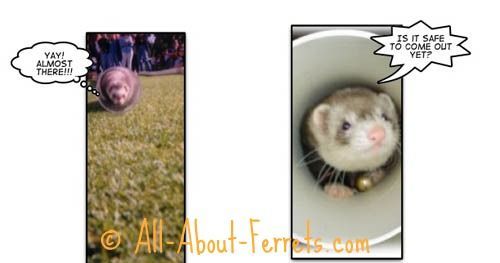 I have seen some ferrets actually fall asleep in the pipe and their frustrated owners having to tip the pipe at an angle so that their ferret slides out.

However there have been some champions who have bolted through the pipes in record time. One of them was Fox, who belonged to a good friend of mine. Lyn always maintained that Fox flew down the pipe because he was so terrified of being put in it, he couldn’t wait to get out the other end. What a hoot.

Some people reckon that if ferrets are used to going through pipes (like ours, as we have a couple lying around the house) then they tend to become a bit ho-hum about going through them. Others, like Fox, freak out so fly through so as to escape. 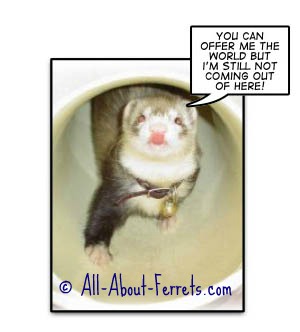 Either way it’s a fun day and always great to be around a busyness of ferrets!

On your marks. Get set. Ferret!

With the start of another ferret-racing season, owners all over the country are sprucing up their best sprinters for the first events of the summer. Any country fair worthy of the name includes a meet, and numerous lesser tournaments are held in the gardens of rural pubs, especially in the north.

The true role of a ferret, of course, is to bolt rabbits out of their burrows; and it is the creature’s propensity for exploring tunnels, together with its natural curiosity, that makes it ideal for racing. All you need do is show it one end of a drain or rain-water pipe laid out on the ground, and in it will go.

Courses are scarcely exacting. The pipes are normally 10 metres long, with a viewing section of wire netting let into the middle, so that spectators can see what progress, if any, their animals are making. Results are unpredictable. Sometimes a ferret will go like smoke from one end of the pipe to the other – the fastest time recorded for 10 metres is 5.29 seconds – but on occasion it will doss down for a snooze half way along. If spectators shout with excitement when their runner appears at a viewing section, the creature may take fright and back up for a few feet, or even swivel round – for ferrets are so supple that they can perform U-turns in even a four-inch drain.

Many races are organised by International Ferret Welfare of Great Britain, a body which rescues and rehabilitates animals lost or abandoned by unscrupulous owners. In the words of the organiser, Chris Tyler, “The idea of holding races is to promote the ferret and raise money for rescue work”. No prizes are given, and bets are extremely modest, the average stake being 10p. As Mr Tyler says, “We must portray the right image all the while”.

He believes that the ferret population of Britain is now between 800,000 and one million, and that Mustela furo is definitely on the up. Moreover, a quick surf of the Internet confirms that the international fancy is becoming increasingly besotted. Here you will find Kodo’s Page, posted in memory of a life cut cruelly short: “Born 26 May ’96, killed 12 June ’97, an innocent ferret and beloved pet: executed in Bay County, Michigan.” Here are details of Seigneur Olivier’s novel Les Ferrets sont Eternels. Here are advertisements for Cool Ferret, “the lifesaving supplement that every ferret owner should have in their first-aid kit”.

These denizens of the websites are clearly all pets; but thousands of working ferrets still make an invaluable contribution to the task of keeping down wild rabbits. Besides, modern technology has improved their efficiency. When I was a boy we always had one liner – a hob (or male) trained to wear a collar with a long cord attached. If another ferret made a kill or went to sleep underground, we would put the liner down and dig wherever the cord led us; but today electronic bleepers provide quicker and surer guides.

Not that working ferrets are always used for rabbiting. Chas Wright, our local brewer, kept one that became adept at fixing up the beer-supply in pubs. Loosed between joists above the cellar, with a cord attached, the brewery ferret would eventually thread its way up through the floor into the bar, enabling its operator to pull the beer lines through.This animal nearly came to grief one day in the Anchor Inn at Oldbury- on-Severn. Chas was standing at the bar, having a pint alongside a very large butcher called Gerald, well known for his fiery temperament. It so happened that as Gerald went out to answer a call of nature, a terrier took a rush at the ferret, which was on the floor.

To forestall a damaging fight, Chas snatched the ferret by the scruff of its neck – but the terrier came up with it, clinging to its tail. Stress caused the ferret, also, to answer a call of nature, and a golden but evilly malodorous jet looped unerringly into the butcher’s mug on the bar. The disturbance was quickly quelled – but what was to be done about Gerald’s beer? Before any decision could be taken, he lumbered back into view – and the instant he took another sup, he gave such a thunderous growl of Phworrrh! that Chas deemed it prudent to beat a swift retreat.

Few modern owners realise that the partnership between man and ferret has flourished since ancient times. The geographer Strabo, writing towards the end of the last century BC, recorded that a plague of rabbits in Iberia (modern Spain) and the Balearic Islands became so severe that the inhabitants petitioned the Emperor Augustus for help; and Pliny, in his Natural History, published soon after the beginning of the Christian era, confirms the story, adding that ferrets (viverrae) were much in demand because they were so good at driving rabbits from their burrows.

Even that, though, is by no means the start of our saga. Four hundred years earlier, the Greek historian Herodotus sounded a similar echo. A word of warning here: Herodotus is sometimes known as “the father of lies” – not because he was deliberately mendacious, but because he tended to believe too many of the fantastic stories he heard on his travels, such as that about the gold-digging ants of Afghanistan, “not so big as dogs but bigger than foxes”, which, when roused to anger, could run fast enough to overtake a camel.

Nevertheless, in Book 4 of his Histories, Herodotus records that the Libyans had ferrets (galeai) “very similar to the ferrets of Tartessus” – that is, like those of the Guadalquivir valley in Spain, mentioned by the later writers. The author also used a word that often puzzled Victorian scholars unfamiliar with country matters – galeaidromos – linking it with what sound like small tunnels built with stones and covered with sand. To us his description is perfectly clear: since the Greek dromos meant “race” or “race track” – as in “hippodrome” – there can be little doubt that the ancestors of Colonel Gaddafi raced ferrets as keenly as we do today.

Return from Ferret Races to All About Ferrets