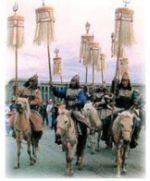 Genghis Khan was originally called Temujin and was born near Lake Baikal, in Russia. His father was a Mongol chief who ruled a huge area between the Amur River and the Great Wall of China.

Temujin succeeded his father and turned out to be a great warrior and military genius who conquered all and sundry. In 1206 Temujin was master of most of Mongolia and it was then that he was proclaimed “Genghis Khan”, which means both “precious warrior” and “lord”. He became leader of the Mongols and ruled from his capital, Karakorum.

In 1826 John Ranking wrote a book called “Historical researches on the sports and wars of the Mongols and Romans” and in it he mentions how Genghis Khan used ferrets to catch rabbits.

“Now, the circle lessening, and the beasts finding themselves pressed, some ran to the mountains, some to the valleys, some to the forest and thickets; whence, scenting the hunters, they fled elsewhere. They retreated to holes and burrows; but spades, mattocks, and ferrets, brought them out.

“The beasts now began to mix, some became furious, and toiled the soldiers greatly to keep them in the circle, and drive them from mountains and precipices; but no animal escaped their vigilance.”

Oh yes … according to the National Geographic, our friend Genghis was also instrumental in populating the earth and they found that he has nearly 16 million descendants living today! So who knows, maybe your grandfather, a million times removed, actually went ferreting with the Khan! Ha ha – how wild would that be!

Another reference to ferrets and Genghis Khan is listed in the Folklore page. 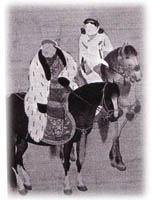 Kublai Khan was the grandson of Genghis Khan and became emperor of all China in 1279.

During his reign, two Nestorian monks called Sawma and Mark set out to go to Jerusalem together and their travels are chronicled in a fascinating book called “The Monks of Kublai Khan Emperor of China” (Mongolian monks), translated from the original Syriac.

Surprisingly, ferrets pop up in this book as well, so it seems obvious to me that they were part of the household back then.

Chapter XVIII talks about the fortress at Arbil (in present day Kurdistan), which was inhabited by Christians, being under siege with all the able bodied men having been killed and how the people were starving, even after eating the animals …

From that time onward there remained in the Fortress no chief, no governor, no counsellor, and no man who knew [affairs]. The messenger remained by himself in the Cell of the Catholicus, but finally he went down, and left them without a helper in bitter weeping and anguished groanings. Alas for that hour full of injury! Alas for that season of affliction which brought forth tribulations! Supposing they dwelt [there]–no strength remained in any man even to draw water, and who was there to do the fighting? Famine (or hunger) vanquished them completely! The, wheat was (196) already finished, and was sold at eight zuze the litya (i.e. pound). As for salt, who could find any? They had already finished the asses, the dogs, and the ferrets, and no old leather objects were left. They filled themselves with the husks of the seed of the cotton plant (`mar-kubha).

Many psalters had fabulous drawings and this one has a illustration of women ferreting, where they netted rabbits then knocked them over with sticks.

Who knows … pehaps those medieval maidens were members of the first ferret society!

The Sherborne Missal is an early 15th-century manuscript, and is said to be the largest and most lavishly decorated English medieval service book to survive from the Middle Ages.

A missal is a book containing the text, and occasionally the music, needed to celebrate Mass and every priest needed one in order to perform the ceremony. The contents of the manuscript show that it was made for St Mary’s Abbey at Sherborne in Dorset, which is in south-west England

The patron was apparently the abbot of Sherborne, Robert Bruyning and it says that the name of the main scribe was, “John Whas, the monk, laboured on the writing of this book, and his body was much debilitated by early rising.” The chief illuminator was John Siferwas and he had a team of 4 artists helping him.

The Missal, which weighs in at 20kg, is worth 15 million pounds sterling. 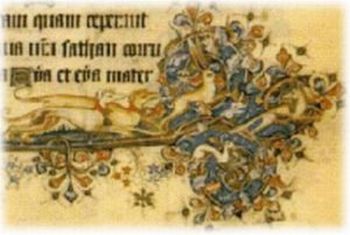 Have a look at the picture – looks like medieval ferreting to me. You can see the dogs going after the hare and below, there are a couple of ferrets looking verrrrry interested!

I came across The Statutes of King’s College which dated back to 1443 and which were included in a book called Ancient Laws of…King’s College Cambridge and Eton College (London, 1850).

Amongst other rules, the ones in Chapter 25 state that “… no scholar, fellow, chaplain, or clerk, or other servant of the King’s College shall keep or have dogs, hunting or fishing nets, ferrets, hawks, or falcons, nor keep in King’s College any monkey, bear, fox, stag, hind, doe, or badger, or any other wild animal or strange bird …”

What a party pooper of a university!

A Swiss physician and naturalist who was one of the founders of modern zoology, Gesner was considered to be a “modern Pliny” in his day.

He wrote the first 4 volumes of “Historia animalium” between 1551-58 and in 1587 he partially completed the 5th volume which was about serpents. His work was a compendium of recorded knowledge of animal life in which he distinguished observed facts from myths and popular errors.

His use of woodcuts as illustrations showed the accuracy of his data and was instrumental in making possible the eventual emergence of a scientific zoology and botany. 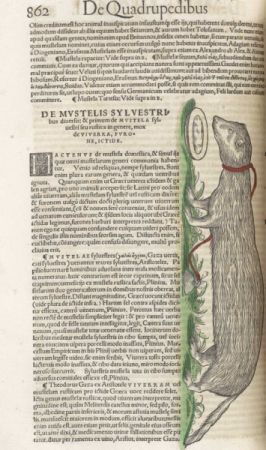 As you can see from the picture above, he wrote about mustelids and the section has a woodcutting of a ferret, which is chained to a bolt in the ground.

He is without a doubt the most famous literary figure of that time and several of his plays have references to mustelids sprinkled through them! But while there were a number of plays which had references to other mustelids in them, there were only two which mentioned ferrets.

In the play of the same name, Julius Caesar has Brutus stating that “… Cicero looks with such ferret and such fiery eyes”; while in The Life of King Henry V, Pistol says “I’ll fer him, and firk him, and ferret him.”

I confess to being at a loss as to what ‘fer him, firk him and ferret him’ would refer to. Sounds pretty rude to me.

Nicholas Hilliard was the son of a goldsmith and he not only became a goldsmith himself but was also a limner (miniature painter). In 1570 he was appointed Court Miniaturist for Queen Elizabeth I.

He painted the portrait of Queen Elizabeth I with the ermine on her arm in 1585. 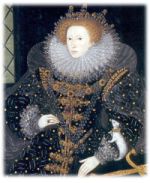 Return from Ferrets in the Middle Ages to All About Ferrets