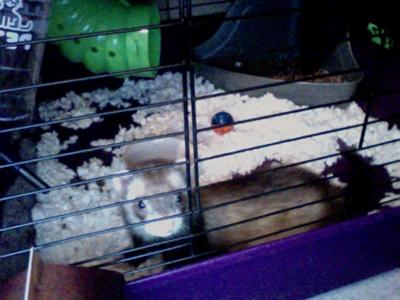 I’m in the midwest in the States… I just bought my first ferret! His name is Little Bear!

When my parents were in college they had ferrets and my dad would take his, Buddy, to class and Buddy would sit around his neck and sleep during class.

I wasn’t really planning on getting a Ferret but I knew it was my parent’s secret wish to own one again, even though they have no money in this economy today. I thought about it and then decided that I needed a pet of my own and something to call MY responsibility. So today I was walking around PetCo with my boyfriend and I saw him, the cutest little guy ever.

I played with him and fell in love. Bear has been so sweet! He has pooped me out already with his playfulness but I will truly enjoy him 🙂 He doesn’t bite and he is already litterbox trained!!! He also likes giving kisses but we have only had him for a day so he’s not too big on him! I can’t wait to share this little fellas life with me!!! he’s only 3 months old too!!!!