We have a copy of the 3rd edition of The Encyclopaedia Britannica, which was published in 1771.

I was fascinated to see what they had to say about the ferret, which was listed under the heading “Mustella”.

As you can see from this little snippet of the text, it is written in ye olde English, with the letter “s” looking like an “f”!

MUSTELLA, in zoology, a genus of quadrupeds of the order for ferae.

There are fix erect, sharp, distinct teeth in the upper jaw, and an equal number in the under jaw, but blunter and closer together, and two of them are situated a little farther within the mouth; and the tongue is smooth.

1. The lutris, with the hind-feet palmated, and the tail about one fourth of the length of the body. It is found is Asia and North America. 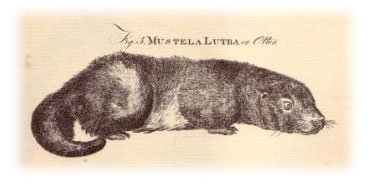 2. The lutra, or otter, has palmated feet, and a tail about one half of the length of the body. This animal is exceedingly voracious; but is fonder of fish than of flesh. He seldom quits the banks of rivers, and can remain a considerable time below water. The female comes into season in the winter, and brings forth three or four young in March. This animal is found in most countries of Europe and North America.

3. The lutreola has hairy palmated feet, and a white mouth. It is a native of Finland and feeds upon frogs and fishes.

4. The barbata, is of a reddish colour; and the toes are not connected with a membrane. It is a native of Brazil.

5. The gulo is of a dusky red colour, and blackish on the middle of the back. It is found on the woody mountains of Lapland, Russia and Siberia. The gulo is a very voracious animal, and devours hairs, birds, etc. He has an abominable odor; but his fur is very precious.

6. The martes, or marten, is of a blackish yellow colour, with a pale throat, and the toes are not webbed. This animal is a native of the southern parts of Europe; it frequents the woods, and feeds upon squirrels, mice, and birds.

7. The putorius, or pole-cat, has unconnected toes, is of a dirty yellow colour, with a white mouth and ears. This animal is very destructive to birds and poultry. He conceals himself during the day; but steals into barns, dove-cotes, hen houses, etc. in the night, in order to catch his prey. He is a native of most parts of Europe.

8. The furo, or ferret, has red eyes, and unconnected toes. This animal is easily tamed, and frequently employed to hunt rabbits out of their holes. The female is less than the male, and brings forth twice in the year, 5 or 6 at a litter. It is a native of Africa.

9. The zibellina has divided toes, the body of a dusky yellow colour, with a white forehead, and an ash-coloured throat. It is found in Tartary, and the northern parts of Asia.

10. The erminea has divided toes; and the point of the tail is red The skin of this animal is a valuable fur, and of a fine colour. It is a native both of Europe and Asia, and particularly of the northern climates. It feeds upon mice, eggs, etc. and has a very offensive smell.

11. The nivalis has divided toes, and a white body. It is very similar to the ermine, but about one half less in size. It is found in Russia and the northern parts of Europe.

Interestingly enough, the Britannica said at the beginning of this that Mustella had 11 species and yet it listed 12.

I guess their proofreaders weren’t so good in those days!

Return from Georgian Ferrets to All About Ferrets