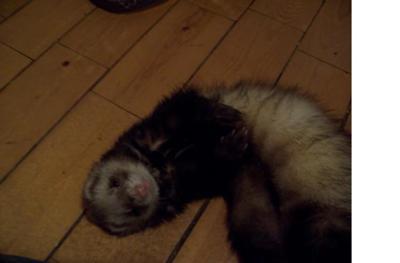 Grace was a feisty ferret that loved to steal everything from french fries to shoe soles. Every so often, she could be seen sneaking off with candy in her mouth.

She destroyed the furniture, making her bed inside the couch and love seat, behind the T.V., and under the fridge.

She never even tried to use the litter box and when I would try to put her in the litter box, she’d scratch it and push it out of the corner, then defecate in the corner.

She loved to play, always doing her little weasel wardance, then bumping into something. She got so wound up, that, if on the couch or bed, she slid right off.

She was fat, too. This animal definitely didn’t starve. She was a small adult ferret, weighing only about a pound, even as chunky as she was, and we even gave her free reign throughout the entire house, so she had plenty of opportunity for exercise; the point is that she was lazy.

Grace was fun, I never got tired of her, but when she started getting sick, she changed.

She no longer went around to each person in the house who had food. Instead she spent all her time digging at her ear until it brought blood.

We treated her for earmites, until the knot appeared. It turned out to be a cancerous tumor that went into her brain.

She had surgery, then went into a nearly comatose state before, two weeks later, she passed on.