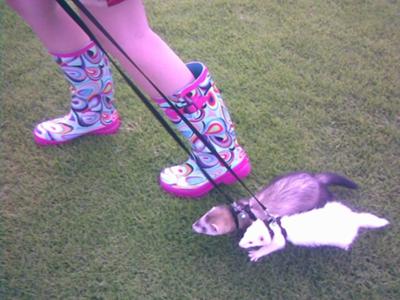 I have two 8 month old ferrets, Heartspark & Deliah, whom I’ve had since they were tiny little kits.

Before I got them, I bought two ferret harness and lead sets, because I wanted to harness train them.

I got Heartspark about a week and a half before i got Delilah and i started training him after I’d had him a few days, just taking a walk up the hall and back twice a day. I did the same thing with Delilah when I got her, though she wasn’t quite as keen to walk as he was.

As they got a bit older, I increased their walks, walking them throughout the house, around the backyard, and once they were fully vaccinated, to the park down the road, so that they could play in the sandpit.

I tried to figure out what it was that put them off walking – I tried loosening and tightening their harnesses, walking them on the footpath, on grass, on sand … I even started taking my dog on walks with us (two ferrets and a hyperactive kelpie are a lot to handle when you only have two hands!), normally i would walk them seperately, but I know they like chasing her wagging tail.

The other day i was walking the fuzzies and Jena (my kelpie), and I was carrying Delilah and walking Heartspark … well trying to … but he just put his brakes on straight away.

Our house is on the top of a hill, so I ended up carring him to the bottom then putting him on the flat ground to walk. Still no luck, so I picked him up again.

When we reached the next hill, an uphill one this time, I put him back on the ground and, to my suprise,he started scampering along happily at my side! Then Delilah started scratching at my arms to be put down and as soon as she reached the floor, she started walking too!

So here’s my theory 🙂

These two crazy fuzzies hate downward slopes, but love walking uphill! I tested it out during the rest of our walk and that certainly seemed to be the case. As for flat ground, if it was immediately after a downwood slope they wouldn’t walk, but after an uphill slope and they’d be fine.

If i take them out in their carrier or just pop them in my bag and then put them on some ‘neutral’ ground, Heartspark will usually walk but Deliah will still want to be carried (*rolls eyes)!

Picky ferrets, I’d love to know how their minds work!

Has anyone else noticed this when walking their ferrets?