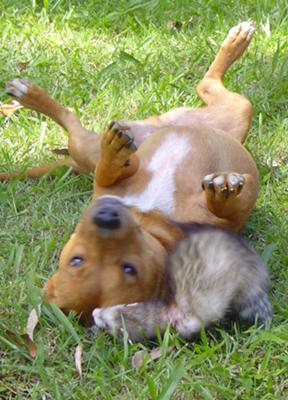 Woody and Boo enjoying a roll in the grass together – best friends ; ) 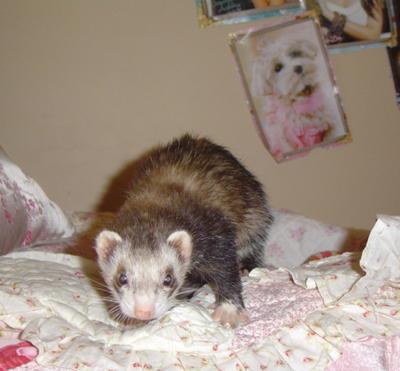 Caught in the act – Boo finally made it onto Edie’s bed! 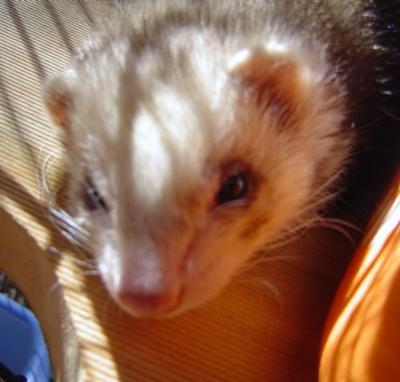 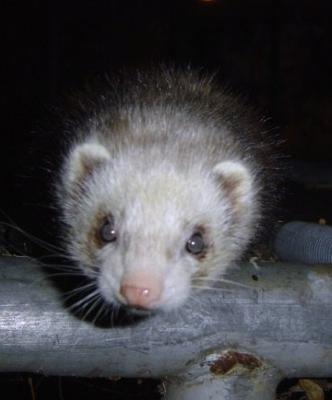 Boo on the trampoline, while we were spotlighting koalas.

My uncle had a ferret he used for rabbit hunting when I was a child, and I remember being fascinated by it. I’d watch it run around the cage with its yellowed fur and red eyes and just wish I could give it a pat. But my uncle obviously knew nothing about ferrets in those days as I recall him feeding it milk and bread … and rabbit intestines! Uncle kept saying ‘don’t touch him, he’s not a pet!’ but I really felt the ferret (who didn’t even have a name) wanted to play with me and be my friend!

Years later, my younger teenage brother got a kit from a friend of his and we named him ‘Sunny’. He was a sable and even though we were first time ferret owners, Mum knew that bread and milk wasn’t a good idea to keep Sunny healthy and happy. Consequently, Sunny had a great life with my brother … or my mum as it turned out! We’d go to school and Mum would let Sunny into the house to play and keep her company during the day (complete with litter tray, and his own secret bed of course!). Then she’d pop him back into his hutch run before my brother came home from school. Sunny was very sociable and loved to run around the lawn with my brother.

We lived on acreage and Sunny would go for a wander down the paddock to the creek with my brother on weekends. Sunny would always return on my brother’s shoulders on the way back, hitching a ride! He would go berserk in the sand of the creek bed, having an absolute ball! Unfortunately, it was on one of these walks about 5 yrs later that Sunny was snatched by an eagle. Pete followed the eagle as long as he could, hoping the bird may drop Sunny, but it eventually flew out of sight, with Sunny still in its claws. Pete was heartbroken … as we all were. But I never forgot Sunny.

Many years later, with a hubby, 12yo & 10yo kids, a dog and a cat I happened into an old fashioned pet store on the North Coast of NSW and noticed a ferret for sale! I was there for about an hour before I finally thought ‘I’ll just have a little cuddle …’ Well, the owner handed this gorgeous little fuzzie to me (who had been fast asleep!) and she stretched and yawned and shivered in my arms as I fell instantly in love!

$60 later, I turned up at home with Boo! who was a 6mth old female who’d been given up for adoption as her teenage owner had moved with his family to Queensland where ferrets are banned as pets.

I realise that kid’s misfortune was my absolute luck as we have not looked back for the past 3+ years with little Boo. She has a HUGE 3-tiered cage on wheels complete with every kind of luxury, yet still loves to come in and help me sort the washing whenever she gets the chance! She steals Riley’s food (our long-suffering cat!), and splashes his water all over the place … before heading in to check whether or not I’ve remembered to close the kids’ bedroom doors! She has access to (ie, I have ferret-proofed!) our lounge room, kitchen, bathroom, laundry and our bedroom and she makes sure I hear about it if any of those doors happen to be closed when they shouldn’t be!

She also loves to jump up on my bed and do her war-dance while I’m doing my best to make the bed! Our adorable little girl is my best friend, and by far the best pet in the world … though to be fair to Woody (Boo’s best friend!), he is the world’s BEST DOG! We were desperate to let Boo have kits, until I heard how awful the mating process of ferrets can be. That did it! No one was going to haul my baby-girl around … so she was neutered at about 12mths old. Best thing we ever did, as I do not think I would be able to let the kits go … no matter how much trouble they are supposed to be!

We love you heaps, little Boo-boo xoxoxoxo
PS. I should say though that 12mths before we got our fuzzie Boo, we had our couch recovered at a cost of $1500 in a beautiful Warwick fabric. BIG MISTAKE!!! You cannot have a beautiful piece of furniture covered in expensive material … and have it remain in tip-top condition. Mind you, no one can notice the holes and filling missing on the couch, as all the damage appears to have been done UNDER and AT THE BACK of the couch. Grrrrr! But I still wouldn’t give her up …