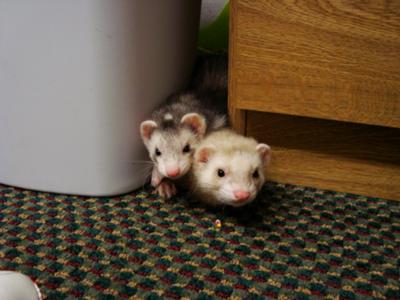 I’m currently in college and my roommate and I decided that we wanted a ferret(or two) even though it’s against the rules in our dorm. But we’ve been successful in hiding them, and I’m getting an apartment soon so I wont have to worry about illegal little weasels soon. ;P

My roomie and I thought it would be clever and cute to name our first ferret Draco (Harry Potter fans will be smiling). Our second we named Harry because we couldn’t resist. We love our little babies, and they are tons of fun.

My only complaint or regret rather was not being 100% knowledgeable about ferrets before making the commitment. I was under the impression that ferrets could be completely litter trained, just as cats, but was surprised to later found out that they’re not always reliable about using their litter box. I don’t mind cleaning up after them, but it is frustrating having to clean poo daily when I wasn’t planning on having to do it for the rest our time together.

In some ways I do regret getting the ferrets now, because I’m not sure if I’m going to like going through the same constraints in my new apartment, but we’ll see how things work out. I love them no matter what though. They can do no wrong. 🙂