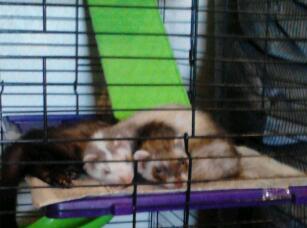 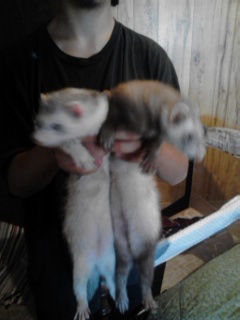 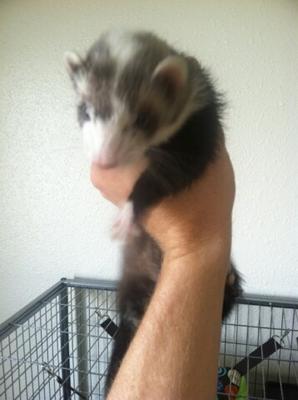 I had decided one day that I wanted a ferret for my hubby. He had always said he wanted one.

So one day I went to a pet store and found my 1st baby. A white female ferret I had named Slink. She was so adorable and fluffy – I just had to have her. Soon, after getting Slink, I moved to Texas and decided Slink needed a friend so I went to Petco and got a male sable that we ended up naming Bandit.

I fell head over heels for my 2 babies, but sadly 8 months later I had to leave them with my mother to go out of town for work. When I got back I came home to an empty cage. I asked my mom where they were (thinking they were running the house) but sadly I had come to learn the neighbor’s cat had got to them when they were in the cage on the front porch. I was heartbroken….

However recently I have gotten a few new additions to the family. 2 brothers from someone that couldn’t keep them any longer and a female I got the same way from a couple in NM (all found on Craigslist).

a cinnamon male named Seth & a grey male named Saber. (Saber gets his name because he has a snaggle tooth grin. His bottom left fang shows all crazy.), & now my lil girl.

My 3 babies are all great! They are very happy and active, and even though they can’t replace Slink & Bandit, they hold a place in my heart all the same.