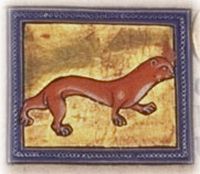 Medieval bestiaries were based on early Greek and Latin texts and were lavishly illustrated, the most well known of one being The Aberdeen Bestiary.

This Bestiary was written in the North Midlands of England around 1200 AD and consists of 104 folios.

The picture of the weasel is Folio 23v, with the description:

The cat, a catcher of mice, mice; the weasel, who hunts snakes and gives birth through its ear or mouth.

The folio on the weasel gives us one of the earliest insights to an animal which could well have been the polecat/ferret, as well as keeping alive the weird impression, found both in the Epistle of Barnabas and The Metamorphoses, about weasels conceiving through the mouth.

“It hunts snakes and mice. There are two kinds of weasel. One, of very different size from the other, lives in the forest. The Greeks call these ictidas; the other roams around in houses. Some say that weasels conceive through the ear and give birth through the mouth; others say, on the contrary, that they conceive through the mouth and give birth through the ear; it is said, also, that they are skilled in healing, so that if by chance their young are killed, and their parents succeed in finding them, they can bring their offspring back to life.

“Weasels signify the not inconsiderable number of people who listen willingly enough to the seed of the divine word but, caught up in their love of wordly things, ignore it and take no account of what they have heard.” 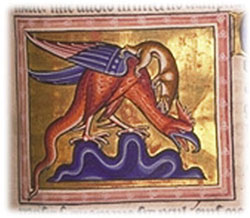 According to the medieval bestiaries, a basilisk was usually described as a crested snake, or occasionally a cock with a snake’s tail.

Its Latin name is Regulus, and its considered the king of the serpents because its Greek name, basiliscus, means little king.

Its odor was said to kill snakes, fire from the basilisk’s mouth was supposed to kill birds while its glance was enough to kill a man! Yet another way it killed was by hissing.

Basilisks were hatched from a cock’s egg (!) and only a weasel could kill it.

The picture, taken from Folio 66r of the Aberdeen Bestiary, shows a weasel attacking the basilisk.

Many psalters had fabulous illustrations and Queen Mary’s Psalter actually has drawings of weasels which were shown to “conceive through the mouth and give birth through the ear“.

This is obviously a hangover from Greek mythology days, like what happened to Galanthis.

You’ll find in a part of Henry V there is a reference to “the weasel Scot” who comes sneaking and sucks her princely eggs!

In Cymbeline, women are said to be “… as quarrelous as the weasel …“. Hrumph! If Shakespeare were around now, I would certainly take issue with him about that statement. Quarrelous, indeed!!

Hmmm, you reckon it mean that the weasel doesn’t vent its spleen but it’s just a sweet little pussycat?

Well, that’s my take on it anyhow and I’m sticking to it! Heh heh.

The illustration below shows more of how the weasel was thought of during the Middle Ages.

Return from Weasels in Medieval Days to All About Ferrets