The mountain weasel (M. altaica) looks very similar to the Siberian weasel (M. sibiricus) but is smaller in size with shorter fur and a less luxuriant tail.

This weasel molts during spring and autumn so the coat changes color during the different seasons.

In winter, the weasel’s coat is a dark yellowish to ruddy brown on the back, while its throat and stomach is a pale yellow-creamy white color. The area between its muzzle and ears usually is a darker grey-brown.

In summer, its fur turns grey to grey-brown with highlights of light yellow showing.

Its lips are white and the stiff hairs, which are located around the nostrils or other parts of its face (called vibrissae), are greyish-brown to white.

The tail is long and not very bushy, measuring more than half the length of the head and body.

6 sub-species of the mountain weasel are known to exist, and all vary in their choice of habitat and fur color. 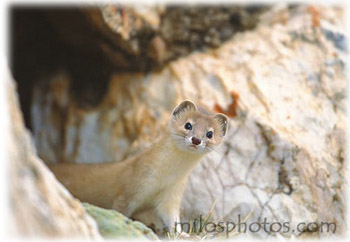 The mountain weasel is very quick and agile, like most members of the weasel family, and they can run, swim and climb with ease.

They tend to be nocturnal but have been known to hunt during the day.[wp_ad_camp_2]

They’re solitary animals, only coming together to mate and then the female tends to her kits until it’s time for them to go off on their own when they’re old enough. 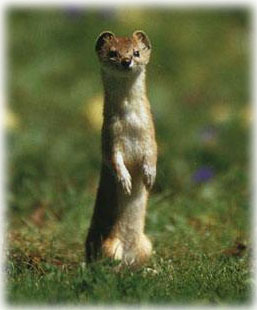 Mountain weasels are thought to breed once a year, usually in spring, and the males are known to fight over a female during the breeding season.

However a lactating female was captured in Lahaul (in Himachal Pradesh) in the month of September, which means the species could possibly breed twice during the year.

It has been recorded that mountain weasles in the Altai mountains of Russia mate in February and give birth in May, with no more than 5 kits born in each litter.

Elsewhere the gestation period for the species is said to be 30-49 days and the female can have a litter of up to 8 kits.

Like most mustelid kits, the babies are born blind and hairless and are totally dependent on their mother until they are old enough to go off on their own. That’s usually when the kits are around 2 months old.

There haven’t been any figures reported on the lifespan of the mountain weasel but it’s assumed that they live around about the same length of time as others of the same species.

That could be a couple of years in the wild and around 7-10 years in captivity.

In India, the mountain weasel (known there as the pale weasel) is found in the Himalayas at a height ranging from 1,500-3,960m, from Ladakh in the western Himalayas (it’s the most common mustelid found there) through Himachal Pradesh, Uttar Pradesh (Garhwal) up to Sikkim.

It’s also found in Kazakhstan, Mongolia, Russia, Pakistan (mainly in Baltistan and on the slopes of Nanga Parbat). The mountain weasel is also found above 3,200m in the Kaghan valley (Mansehra District of Pakistan’s NW Frontier Province), as well as western & northern China and Korea.

The mountain weasel is listed in Schedule II, part II of the Indian Wildlife Protection Act of 1972, and on Appendix III of CITES.

They make their homes in crevices in the rock, tree trunks or abandoned burrows, and can also live close to humans.

It has been reported that Altai weasels are very friendly and appear to be quite tame when they approached people in tents in Yeniugou, China.

Like others in its family, mountain weasels are carnivores and feed mainly on pikas (smallest members of the lagomorph family) and voles.

How to say Mountain Weasel in Different Languages

Return from Mountain Weasel (Mustela altaica) to All About Ferrets