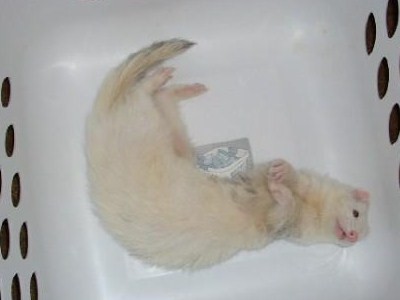 George sitting in the clothes basket after I’ve put up clothes. I’m guessing he’s looking for my socks

I’ve taken so many pictures of him because he is always doing something silly. He loves to play chase and nip at your feet when you walk.

When we first got him, he was very independent. We’d let him out of his cage and he would go off exploring. A few months passed and now every time he gets out, he immediately goes and finds me.

A few days ago, my fiance’ had to go out of town for a funeral and I decided to stay with my aunt. My aunt has a black Pekingese named Izzy. I was very cautious that Izzy would not like George and try to harm him.

One morning, George wanted out of his cage so I put his harness on him and took him for a walk upstairs. Izzy was out in the hall so I was cautious. I sat down and picked up George and introduced them. Izzy did not know what do! Everytime George moved, Izzy would jump back. Well after a while, I was confident that he was not going to hurt him. So I shut my bedroom door and let George off his harness. They played for a while and then George jumpted in his cage, climbed in his hammock and went to sleep. Now, I’m happy to say that everytime I open my door, Izzy runs up the stairs, jumps on my bed and waits for George to wake up so he could play. It was really cute and I will cherish that memory.

I’ve decided to get George a friend because he is seem lonely. I’ve got a lady coming in from South Carolina (I’m in Va) to sell me her ferret with his cage. The only worry I have is if George will be okay with this? I don’t want him thinking we are replacing him. I’m doing this for him. So he will not be lonely when we are away.

I plan on selling his old cage since the cage I am getting is bigger. I’m going to keep his hammock so he can sleep in it. That way he can have something that it his. I’m also keeping his water bottle and food dish. I don’t want any rivalry between the ferrets. They are both males and are sterile. So I’m hoping that this will not cause any problems.

Ferrets aren’t that bad. Sure, he does steal my socks and hide them under the recliner and I’ve caught him sleeping under there. He even loves getting into our dresser drawers and falling asleep.

The only problem with him is that he loves to use the bathroom in our bathroom instead of his cage. And he loves getting into the waste basket or getting under the sink and going to sleep. And you are right. Ferrets love digging at carpets. We still haven’t found a solution for that yet.