I think Otis suffered from DIM. At least, that is what it resembled but since my vet didn’t know, and since I couldn’t face having my boy sliced and diced for an autopsy once he died, we will never know for sure.

The first thing which I noticed was that his poop was looking skinny – not at all normal. And the other thing was that he seemed to be dragging his right hind leg. It initially started off as a very slight weakness but progressed to being pretty obvious as the days went by.

I was a little worried because Otis absolutely loved having Schmakos with the dog in the mornings. I never gave him much – just a couple of tiny bits torn off from the Strapz before I gave the rest to our dog.

When I noticed the poop, I immediately started to fret that maybe the Schmakos weren’t being processed in his stomach and he had this huge collection building up in his stomach. Paranoia just doesn’t begin to describe my thoughts!! 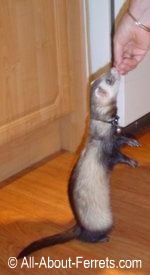 So off we went to the vet and she ordered X-rays to make sure there wasn’t anything stuck in his gut and, because I was concerned about his leg, she suggested blood tests to see if there was anything else there.

The X-rays came back clear and the blood tests were inconclusive. A slight showing of inflammation but nothing else that seemed to warrant any major concerns.

Since Otis’s brother, Milo, had gone through that bout of eosinophilic enteritis, my vet suggested I put Otis on the same amount of Prednisone as his brother, i.e. 0.5mls once a day, to see how he fared. She suggested having him on the Prednisone daily for a week, then every other day for the next week before stopping altogether.

He improved dramatically when he was on the daily dose and seemed to be okay when I whittled it down as instructed but once I stopped, he went into a steep decline. His poop looked like a bird’s – greenish blobs – and then both his hind legs seemed to stop working properly.

I whisked him back to the vet and she thought that he might have an inflammation of the pelvis, which was affecting his hind legs, so told me to keep him on the 0.5mls of Prednisone every day.

For the next couple of months he seemed to be fine. He was eating well, enjoying his smoothy, playing with the others, and was quite bright and happy. The only things that weren’t quite right were his poop, which still looked like green blobs, and occasionally his hind legs seemed not to work properly.

Then in October he started to look thin and his coat seemed scruffy – always a worrying sign. I was pretty sure he was eating normally, as I would find him with his face stuck in the food bowl, but I also noticed he was acting strangely when he was licking his smoothy.

He’d lick at the mixture then lick the edge of the dish, which seemed odd. Then afterwards he seemed to rub the right side of his face along the towel which I put down.

Back we went to the vet and I asked if she would clean his teeth and make sure he didn’t have an abscess or any problems in his mouth. She did that and checked his mouth, and advised me everything looked fine. She had weighed him and he was just under 1kg. That was quite a significant drop in weight, as he had always been a big, strong boy.

That was at the beginning of November, just before we left for Melbourne to attend our son’s graduation. We were only gone for 4 days but when we got back, I was horrified to see that his hind legs seemed completely useless and he looked like he was on death’s door.

The beginning of the end

The next day I whisked him down to the vet and she called another ferret knowledgeable vet to see if he had any ideas about what was causing this rapid decline in Otis’ health. By this time Otis had lost more weight and was down to 910g.

The other vet thought it might be a partial blockage, caused by foam or something else which didn’t show up on the X-ray originally. My vet then suggested we do a barium X-ray to rule that out. I said okay, even though I didn’t think it was that since Otis had initially improved with Prednisone, something he wouldn’t have done had it been a partial blockage.

That was done on the Tuesday, together with more blood tests. Again, when the results were in the X-rays were completely clear and the blood tests were inconclusive, with just mild inflammation showing up.

By this time Otis was not interested in food, so I made him up a special smoothy (like the one I did for Milo when he refused to eat) and was syringe-feeding him every half hour.

I also got a can of Hill’s Science Diet A/D Formula, mushed it up with some hot water, and sucked that into a syringe so that I could get it down his throat.

He seemed to be improving very, very slightly and I was actually quite optimistic. He was wandering around the house and sleeping in his usual spot in the sitting room. I even thought he had gained some weight.

By Saturday he was getting very difficult to syringe-feed, fighting me when I tried to put food into his mouth and he was more reluctant to eat on the Sunday.

By this stage I was at my wits end, as there was no way he would eat or drink by himself, and he was getting quite angry with my attempts to put food or water into his mouth. When I went to bed on Sunday night, I was hoping that nature would take its course and Otis would slip away in his sleep.

Unfortunately that was not to be. He woke me several times during the night groaning and moaning, and he seemed so agitated and distressed. It really was the most awful experience, watching him so obviously dying and not being able to do anything to help him.

By 8 on Monday morning, I rang the vet’s office and tearfully explained my predicament. The nurse was so kind and said she would administer the injection as my vet wasn’t due in for another hour, and I couldn’t let Otis go on this way for any longer.

I rushed him over, he had his injection and slipped peacefully over to the Rainbow Bridge within a few minutes.

I brought him home and buried him and couldn’t stop crying for my little man. Not yet 3 years old and no longer with us.

I suppose I should have had an autopsy done so that we would have known what killed him but after seeing him stressing out over the weekend, then holding his peaceful little body in my hands once he left us, I just couldn’t put him through that.

So we will never know what awful disease he had but, just from reading the symptoms of DIM, I feel sure that he had that. The comparisons are just too similar.

I’m sure he’s playing happily at the Rainbow Bridge with Mash, Fidget, Chucky and the rest of my old gang and we will meet up again one day. I am just so sorry he had to have such a short life with us here.