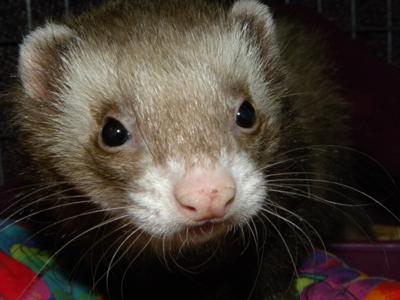 Paris was such a sweet and laid back ferret. His motto was “Whatever!” LOL. He loved his siblings and was especially close to my oldest ferret Hazel, who passed away in November.

I received Paris when he was almost one. His previous owner moved to Japan and was unable to take him with her due to import laws.

In December he had an operation to remove a very large tumor and his spleen. The tumor had spread to his spleen and needed to be removed. Unfortunately they were unable to remove the entire tumor because it was wrapped around his main artery. He did really well for a few months and then started to go downhill. The tumor had spread to his lungs, his lymph nodes were swollen, and his heart was enlarged. It all just progressed so fast. On top of all that he was having reactions to almost all of the medicines we gave him and he wasn’t responding to the predinsone.

Two weeks ago the vet sent us home with pain medicine. There wasn’t anything else we could do for him.

We helped him to the Rainbow Bridge on Friday June 25, 2010. That is never an easy decision.

We just don’t get enough time with these guys. He would have been five years old on July 31, 2010.

I miss him so much and I just can’t stop crying. But I know he is no longer in pain and he is with Hazel.