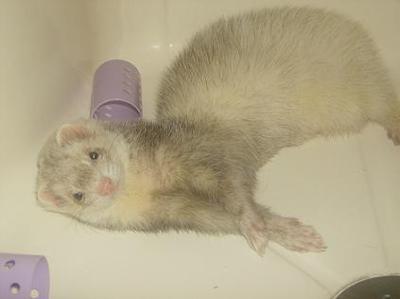 Popcorn was found on a street and given to me by my husband’s coworker in December 2007.

He was champagne colored and had a broken fang, so when his mouth was closed you could only see one.

I had never owned a ferret before, but he was not what I expected. Rather than being aggressive and troublesome, Popcorn was gentle even in play and very affectionate. He was exceptionally well box trained and only ate ferret food and treats.

We ferret-proofed my room and kept the door shut so he’d have a safe place to roam and play. Every morning I’d let him out of his cage and he would do his little wardance for me. He’d follow me around and would sit at my feet–every time I looked down he was looking up at me. I was completely in love with the little guy.

After my cat passed away in June, we purchased a companion for Popcorn, a DEW we named Beelzebub (aka BB). They bonded immediately. It was so much fun watching them play together.

On Monday, November 10th, I started to worry when I noticed Popcorn wasn’t coming out of the cage. I gently picked him up and set him down in front of his water bowl, and he would stumble as if he had no balance. When I cradled him in my arms he made little squeaking sounds and just stared at me. So I called off work and made an urgent care appt with his vet for that evening. It was at that time that I found out someone had accidentally stepped on him Sunday night.

I explained what had happened to the vet and she x-rayed him, but found no broken bones or cracks or any injured organs. They believed he might have had a muscle injury and that he’d heal okay with a little pain med, but they wanted to keep him overnight because he was dehydrated. So I let him stay, believing I’d be picking him up early Tuesday morning. When the vet called that morning, she was a bit concerned that Popcorn’s belly was a little bloated. She wanted to have a sonagrapher look at him that afternoon. I waited for her call.

When I heard back the news was not good. The sonagrapher discovered that the tract that carries urine and toxins from the kidneys had a small tear in it and was leaking into his abdomen. She said she was very sorry, and that it would be best for him if he were put down. I couldn’t believe it. I asked for them to wait until I arrived, but I kept hoping it was a bad joke or dream.

I got there with my family and had to go through the hassle of paperwork before they finally brought Popcorn in to us. He was swaddled in a fleece blanket and looked just fine. Everyone petted him and said they loved him, then they left me and my daughter alone with him to wait for the vet. We took turns holding and petting him and kept telling the staff we needed more time, but eventually we had to get on with it. I cuddled my baby in my arms and gently stroked his head as she injected the fluid into his iv. He didn’t squirm, just laid snuggled against me.

I don’t think I’ve ever cried so hard in my life. Not a day has gone by since that I don’t cry for him.

It’s hard to believe that only two and a half weeks ago my Popcorn was still with me. I am completely devastated. There is not a moment that passes that I don’t miss him painfully.

I love you, Popcorn. You will always be my little angel!