According to Dr Alexei Abramov at the Zoological Institute Russian Academy of Sciences, M. eversmanni / M. eversmannii are both incorrect. He states that the Latin for the Steppe polecat should be spelled Mustela eversmanii.

The Siberian weasel (Mustela sibirica) is also occasionally referred to as Siberian polecat, which can be confusing.

The Steppe Polecat is very similar to its European cousin in size, color and proportions, apart from the fact that its head and back are nearly or completely white. Another difference is that the adult Steppe polecat’s skull is heavier in appearance and is sharply constricted behind the orbits.[wp_ad_camp_2]

Steppe polecats breed during March to April. Gestation ranges from 39 to 43 days and the mothers have been observed giving birth around mid-May. The average litter size is 6-8 kits.

According to Fara Shimbo, in her book “A Tao Full of Detours”, the Steppe polecat mainly hunts rodents and it preys on the suslik, a ground squirrel. Therefore, like the Black-Footed Ferret, the steppe polecat is adept at hunting in the tunnel systems inhabited by their prey.

The Steppe polecat is found in the open grasslands and semi-deserts of Eastern Europe and republics of the former USSR, as well as Mongolia and West, Central and North East China.

The Steppe Polecat and man

In order to keep traditions alive, the indigenous Siberian population have resurrected popular games and competitions from the past and one of them is the “throwing of a lasso on a polecat”!

Hmmm! Verrry interrrresting! I would REALLY like to see how they manage to throw a lasso around a bolting polecat! The mind boggles!

We trust no mustelids are hurt while they’re being chased around the tundra with a Siberian twirling his lasso! 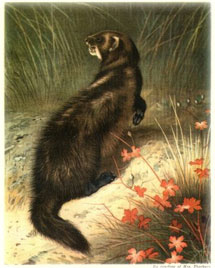 
How to say Steppe Polecat in Different Languages

Return from Steppe Polecat (Mustela eversmanii) to All About Ferrets