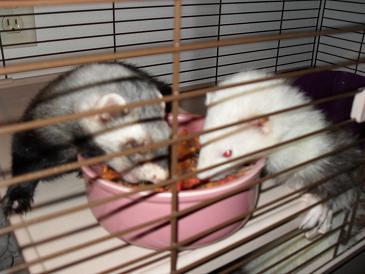 The first time they became friends.

When we got our ferret, Obby, I had read pretty much everything about ferrets. I actively sought out the worst ferret stories hoping to find to prepare myself for the joys of owning such a unique pet.

When we were at the pet store, there were two of them in their habitat, and we chose the jumping, bright-eyed, nipping little thing. You could hardly hold her, she was such a squirmy bit of energy.

At the time I was not working, so I hoped for her to keep me company throughout the day. I was shocked at how little she wanted to interact. I would try to hold her, or chase her, or catch her attention and all she wanted to do was root through my DVDs and stash them in the closet she learned how to sneak into. And when she wasn’t doing that, she was defecating in the small number of spots I had not added litter pans to.

The first interaction with her that I had was when she wore her tiny self out. She was in such a deep sleep that I could pull her about and pose her limbs without her waking up. As she grew older, we had many little struggles. She constantly would relieve herself through the bars of her cage, despite having extra litter pans in her cage, with excrement in them.

I would stop her from getting into something by making a noise and relocating her, only to have her defiantly stare me down as she returned to the scene of the crime. I was definitely frustrated but I loved her strong will as much as I despised it. She was more of a character than a pet but she was ours and we loved her.

After several months, it occurred to me that I was frustrated at Obby for being a ferret. All of these things are normal and I knew that, it wasn’t like I got her hoping for a cat. Somehow that helped.

I repositioned some stuff in her habitat, she started using her litter box. Things were getting better. Then Rocky came into our life.

Rocky lived with my friend’s niece, he was mostly alone in a cold garage and didn’t get much attention at all. I went for a visit one day and brought Obby with me. It broke my heart to think of him all alone. I swore I would never get another ferret but I couldn’t quit thinking about him.

Within the week he was ours. This changed everything. Obby slowly learned to interact with him and had less time to destroy my possessions. Rocky slowly opened up and I got to watch him explode with joy at having attention and freedom. They both compliment each other, Obby has toned down some, and Rocky has perked up. I can honestly say that two ferrets are infinitely better than one.

Ferrets went from being a less than great decision to my weasley buddies I could never live without.