Eagles may soar, but weasels don’t get sucked into jet engines. ~~ John Benfield

Some weasel took the cork out of my lunch. ~~ WC Fields

Every now and then when your life gets complicated and the weasels start closing in, the only cure is to load up on heinous chemicals and then drive like a bastard from Hollywood to Las Vegas … with the music at top volume and at least a pint of ether. ~~ Hunter S Thompson, “Fear and Loathing in Las Vegas”

I startled a weasel who startled me, and we exchanged a long glance. . . . Our eyes locked, and someone threw away the key. ~~ Annie Dillard, “Teaching a Stone to Talk”

Love is like racing across the frozen tundra on a snowmobile which flips over, trapping you underneath. At night, the ice-weasels come. ~~ Friedrich Nietzsche

“One of our defects as a nation is a tendency to use what have been called ‘weasel words’. When a weasel sucks eggs the meat is sucked out of the egg. If you use a ‘weasel word’ after another there is nothing left of the other.” ~~ Theodore Roosevelt

In Henry V there is a reference to “the weasel Scot” who comes sneaking and sucks her princely eggs!

In Cymbeline, women are said to be “… as quarrelous as the weasel …“. Hrumph! If Shakespearel were around now, I would certainly take issue with him about that statement. Quarrelous, indeed!!

Well, that’s my take on it anyhow and I’m sticking to it! 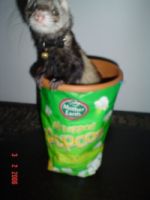 From what I could find out, ‘to pop’ was apparently slang for pawning. However there are a number of different explanations for “weasel”.

One was that it stood for ‘weasel and stoat’ (Cockney rhyming slang for “coat”) and other said weasel was a corruption of ‘whistle’ and again, in Cockney rhyming slang, ‘whistle and flute’ referred to “suit”. Either way, it has something to do with a man’s jacket.

There are also opinions that the word ‘weasel’ referred to a tool used by cobblers, hatters and tailors or was something like a shuttle or bobbin, which could also be pawned.

So, the song has nothing to do with weasels popping but everything to do with going down to the pub, drinking till all your money was gone, then pawning your suit or the tools you worked with to get more money so that you could drink more.

The Eagle refers to a pub in Hackney, North London, situated on the corner of City Road and Shepherdess Walk. In 1825 the old pub was rebuilt as a music hall, which Charles Dickens used to go to, then in 1901 the hall was pulled down and the present pub built.

It’s not clear who was the author of the rhyme but one name suggested is W R Mandale.

You can find a fuller description on the origins of the song both at the World Wide Words website, while this site shows a picture of the Eagle pub with the verse actually written on the outside.

Return from Weasel Quotations and Nursery Rhymes to All About Ferrets