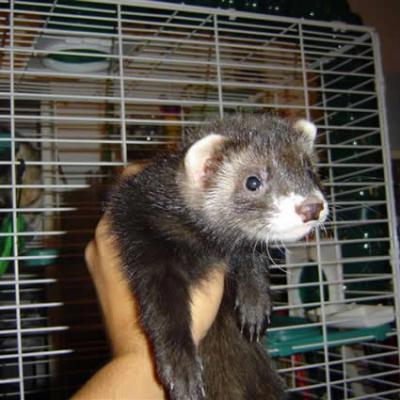 When I first fell in love with ferrets, I didn’t think it would be right to get any because my house is very old with loads of holes and cracks everywhere and thought my ferrets would get stuck all the time; I wouldn’t want to do that to any animal because I’m such an animal lover.

But then I found out about Marshalls ferret playpens and I thought that I could leave them in the playpen for a while, when out of their cage, and then let them out in the room with me supervising them.

I was so happy and thought I had got it all sorted, and I got two sable coloured kits and it was love at first sight! 🙂

I did what I had planned for the first few weeks and there didn’t seem to be any problems, apart from getting soil all over my carpet from a plant that has now been moved out of reach.

But then one day when I was going over to the playpen to play with my fuzzies, I found that Bear had escaped!

I searched everywhere for him and finally found him stuck behind the piano. Although he was OK, if I hadn’t found him soon who knows what could’ve happened.

Since then I have thoroughly ferret proofed my home, even though it did take some time, and I only let my fuzzies in the playpen when I’m there.