The name for this weasel comes from its deep yellow colored underbelly. Its upper parts are a dark chocolate brown and its upper lip, chin and throat are edged in a lighter yellowish-white color. 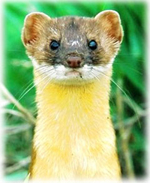 The tail is more than half and sometimes nearly two-thirds as long as the head and body; its foot pads are well developed and exposed and the soles of its hind feet are bald.

The head and body length of the yellow-bellied weasel is around 25-27cm and its tail length is 12.5-15cm. Its weight is approximately 1.56kg

It has been reported that the Nepalese kept yellow-bellied weasels as rat catchers and as they were easily tamed, they also trained them to attack animals like goats, sheep and even geese for sport.[wp_ad_camp_2]

Like their other mustelid cousins, the yellow-bellied weasel is a solitary and territorial animal that tends to be nocturnal.

Not much is known about this type of weasel’s reproductive system.

Researchers think that it’s similar to its close relative, the ermine (M. erminea), which means it breeds annually in late Spring or early Summer but the implantation of fertilized eggs are delayed until Spring in the following year.

Litter size of kits range from 3-18 and if they are like most mustelids, the kits are blind at birth but by the time they are 8 weeks old, they are ready to go out and hunt on their own.

In the wild it is likely that the yellow-bellied weasel lives for 3-4 years after reaching adulthood but in captivity, it could live up to 8-9 years.

This weasel inhabits pine forests and also occurs above the timber line at an altitude of 1800-4000m.

According to the IUCN Red List of Threatened Species, this species is listed in the “Least Concern” category.

Yellow-bellied weasels eat mostly rodents such as mice, rats, and voles, as well as birds & other small animals.
[wp_ad_camp_3]

How to say Yellow-bellied Weasel in different languages

Natural History of the Mammalia of India and Ceylon, by Robert A Sterndale

Return from Yellow-Bellied Weasel (Mustela kathiah) to All About Ferrets