Adrenal disease seems to strike ferrets when they are around 6 years old here in Western Australia.

In America, it seems to affect ferrets at a much earlier age and there is a growing opinion that the early neutering of ferrets contributes to this problem.

The disease progresses slowly and these days the success rates after surgery are quite high, and the ferret has a good chance of complete recovery and a long and happy future.

Some of the things to watch out for are:

Loss of hair, starting at the base of the tail

Scratching due to itchy skin
[wp_ad_camp_2]

Because adrenal disease appears to affect the hormones in various ways, you might find that:

Females with adrenal problems can have swollen vulvas, appearing to be in season even if they have been spayed.

Males can show aggression, even if they have been neutered, and also tend to have prostate problems, so keep an eye on your boy to make sure he isn’t straining in the litter box.

Treatment is usually the removal of the affected gland surgically but if the ferret is not a good candidate for an operation, then it can usually be treated with drugs.

Speak to your vet about getting an implant for your ferret if it’s not a candidate for surgery.

More information on Deslorelin acetate implants can be found on this site.

Having dodged the Adrenal bullet for 17 years, it finally came and bit me in the backside in February this year (2011).

My albino boy, Angus, had a beautifully thick winter coat but as summer progressed it thinned out quite it bit. It didn’t worry me initially, as we were going through a very hot summer. However around the end of February it struck me that Angus was losing a line of hair on either side of his spine.

It was hard initially to notice it happening, because of the white hair and skin underneath. But as time went by, it was very obvious that yes, Angus was losing hair on either side. 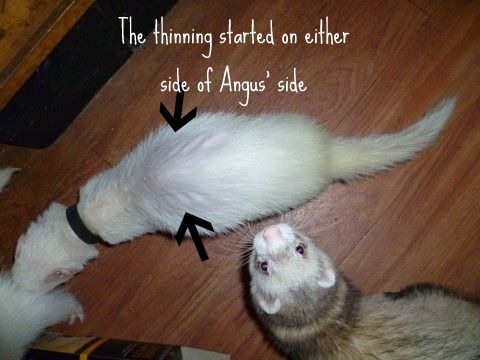 I spoke to one of the Committee Members at WAFFS about the problem and was told that Dave Neck, the society’s vet, won’t operate on ferrets 5 years and upwards – he puts a suprelorin/deslorelin implant in.

I took Angus to Fiona, my vet, and when she examined him, she agreed that there was no doubt that he had AGD – the bilateral hair loss up his spine, the translucent skin … they were the only two symptoms he had but they were definite enough for her.

I asked Fiona about what she thought of the suprelorin/deslorelin implant and asked if it was just a cosmetic fix. No, she said, it wasn’t because it helps to suppress the production of GnRH in the brain which, in turn, suppresses the production of hormones from the adrenal glands.

It doesn’t cure the disease but it certainly helps the ferret to get back to normal.

When I took Angus to see Fiona, he had lost quite a bit of hair off his back, as you can see from this photo … 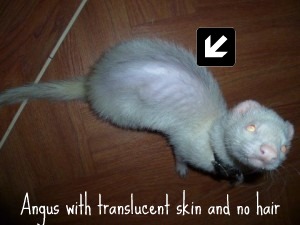 He didn’t get over-aggressive with the other ferrets, thank goodness. To be honest, if it weren’t for the hair loss and translucent skin, I would never have known he was ill. He was always my numero uno weasel wardancer and the illness certainly didn’t slow him down one bit ?

I took him to get his implant on March 24 (2011) and Fiona said that it’d take about 2 weeks to start working so I marked the date on the calendar and once that fortnight passed, I kept my beady little eyes on him.

There wasn’t any sign of improvement until the end of April. I noticed that Angus’ back was no longer translucent but the skin was looking “thicker” and had a yellowish tinge to it.

Over the weekend his fur started to look fuller and it was very obviously when I stroked his back that it was growing back. 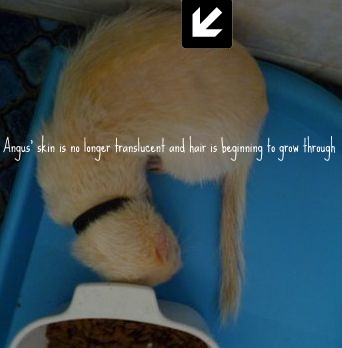 I am thrilled with the result and hope that my little man’s improvement will continue as the weeks go by ?

Update: Sadly, just at the time when Angus was about to see the vet to get his 2nd implant, he suddenly got ill. It took 3 days from the first sign of illness to him leaving us for the Rainbow Bridge. He’d had an ultrasound on the Friday which found he had Acute Renal Failure and he died the next day. He was buried on May 10, 2012 ?

Virbac have a Vet Locator on this page which should find a vet who’ll be able to prescribe a Suprelorin implant if your ferret needs it.

Nico Schoemaker, the Dutch vet who first used the implant to “sterilize” male ferrets, wrote a comprehensive article about his findings.

You can download the pdf HERE, either to read yourself or to give a not-so-ferret-savvy vet to read if you want to go that route with your male ferret.

I’ve put up a few pdfs from the American Ferret Association which might be of interest, so please feel free to download the ones you want …

Cryosurgery of the Adrenal Gland in the Ferret by Charles A Weiss, DVM and Anne K G Bazilwich, DVM (AFA)

Links to supplements which *might* help a ferret with adrenal problems …

TheChocandBlancshow by Lisa, an AAF reader