The black-footed ferret’s closest relative is the Siberian (Steppe) polecat, which leads a similar life on open grasslands and semi desert regions across Russia, China and Siberia.

Both these species have 38 chromosomes while the ferret has 40. 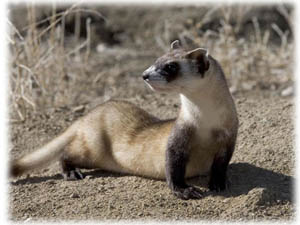 Siberian (Steppe) polecat fossils have been discovered in Pleistocene deposits in Alaska which led scientists to believe that the BFF descended from the Siberian polecat when it crossed over to North America during that time; as the two continents were connected at what is now the Bering Strait.

Black-footed ferrets used to be found throughout the Great Plains from Alberta and Saskatchewan, Canada, as well as the foothills of the Rocky Mountains east to Nebraska and south to Texas and Arizona. In the early to mid-1800s they were occasionally listed in fur company records from the upper Missouri River basin.

However at present they are considered one of the most endangered mammals in North America due to loss of habitat and the widespread eradication of the prairie dog, their main food source.

By the 1960s it was feared that they might be extinct as the last remaining small colony of black-footed ferrets in SW South Dakota disappeared. However in 1984 in Wyoming, a rancher’s dog called Shep killed a black footed ferret which had come up to its food dish. This caused great excitement and scientists were thrilled when a small colony was discovered.

The authorities decided to capture some of the animals for breeding purposes but the first group died of canine distemper. The remaining 18 ferrets in the colony were captured, vaccinated and sent to a breeding centre.

By the early 1990s this group had increased to 311 animals, 49 of which were released into the wild.

The scientists had to work out how to teach the captive ferrets how to cope so they got dogs to chase the ferrets around, and used stuffed owls and remote-controlled “robo-badgers”, all of which taught the ferrets to fear predators and learn how to get away from them.

They also introduced prairie dogs into the compound so that the BF ferrets learned how to catch them and turn their burrows into their own homes.

Those lessons turned out to be extremely successful and the next group which was released had a far better chance at survival.

The black-footed ferret is a slender, sinewy animal with pale buff colored fur on the sides and back but which turns lighter on the face, throat, chest and stomach. It has a black mask on its face, and its feet and the tip of its tail are black as well. 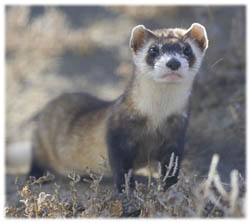 Like most mustelids, black-footed ferrets are solitary animals except during the breeding season and when females care for their young.

Black-footed ferrets generally breed during March – May, and the mother gives birth to a litter of approximately 3-4 kits after a gestation period of 41-45 days.

90% of their diet is prairie dogs. The remainder of the diet includes mice, ground squirrels, rabbits, rats, birds, reptiles and insects. 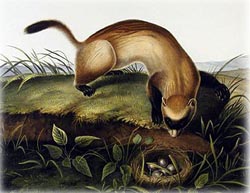 Because of predators and diseases, black-footed ferrets usually only live to be 3 or 4 years old in the wild while those in captivity have lived to be 9 years old.

Black-footed ferrets are closely associated with prairie dogs found in short- and mid-grass prairies of the Great Plains. They use prairie dogs for food, and use the burrow systems for shelter and for raising young.

They are primarily nocturnal, with most daytime activity limited to the first few hours following sunrise. Like the Siberian polecats, they spend most of their time in underground (prairie dog) burrows, usually spending only a few minutes above ground each day.

However they tend to remain underground in the same burrow system for a week at a time in winter.

Native Americans had a special regard for the black-footed ferret and they used its pelt on their headdresses and during religious ceremonies. They also were aware of the close association between prairie dogs and BF ferrets.

Archeologists have found skeletons of both animals in prehistoric Indian camps and the different tribes also had certain beliefs about the BF ferret.

The Sioux called them “pispiza etopta sapa”, which means ‘black faced prairie dog’, while they were called ‘ground dogs’ by the Pawnee tribe, which gave them special powers in their stories.

Navajo Indians called them “Dlo ii liz-hinii” and used their body parts for medicinal purposes and, together with the Cheyenne & Blackfeet tribes, used the skins to decorate their headdresses.

The Hualapai Indians called them “Na-math” and considered all living things which come out at night as sacred. And the Crow used their skins in sacred ceremonies as medicine bundles.

These skins, stuffed with cotton and decorated with leather, cloth, bells and feathers can be seen in several museums in the West. 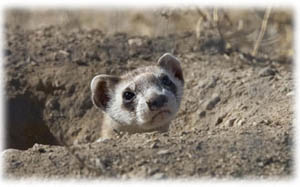 How to say Black-footed Ferret in Different Languages

What a great idea! Go to the Black-footed Ferret Recovery Program site and adopt a black-footed ferret.

Movie/Clips of the Black-footed Ferret

There are some short clips from the BBC Motion Gallery of black-footed ferrets so if you’d like to see them, check out the ARKive website.

And there’s also a great little movie (5 minutes long) showing the way the US Fish & Wildlife Department goes about introducing black-footed ferrets out into the prairies of Colorado here.

The kits are so cute – you’ll want to reach into the movie and hug them!!

Return from Black-footed Ferret (Mustela nigripes) to All About Ferrets