The specific name of the least weasel — nivalis — is from the Latin nix, genitive nivis, meaning snow or snowy. 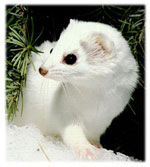 O.E. weosule, wesle “weasel,” from P.Gmc. *wisulon (cf. O.N. visla, M.Du. wesel, Du. wezel, O.H.G. wisula, Ger. Wiesel), probably related to P.Gmc. *wisand– “bison” with a base sense of “stinking animal,” because both animals have a foul, musky smell (cf. L. vissio “stench”). The verb “to deprive (a word or phrase) of its meaning” is first attested 1900, so used because the weasel sucks out the contents of eggs, leaving the shell intact; the sense of “extricate oneself (from a difficult place) like a weasel” is first recorded 1925; that of “to evade and equivocate” is from 1956. A John Wesilheued (“John Weaselhead”) turns up on the Lincolnshire Assize Rolls for 1384, but the name seems not to have endured, for some reason.

Least weasels’ bodies are long and slender with a short tail, and their head resembles a ferret’s, being long and having an oval shape. They have dark eyes and short and stubby ears, which enable them to hear extremely well. The animal has an excellent sense of smell. They have 5 toes on each paw.

Their fur is a ginger to russet brown, with a cream underside. 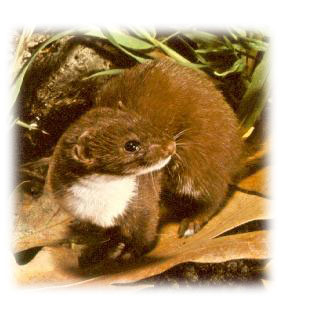 Strangely, northern and eastern weasels turn all white in winter, while the southern European varieties stay brown. It has been noted that more females go white than males.

When they are all white, they could be mistaken for a stoat but if you look carefully, you’ll see that the least weasel doesn’t have a black tip to its tail while a stoat does.[wp_ad_camp_2]

I found it very interesting to read an article in a Sri Lankan paper which claimed that, unlike the winter coats of other weasels, the least weasel’s winter coat glows a bright lavender color under ultraviolet light. Does that mean that the ermine doesn’t glow under UV light? I guess not, according to that particular article.

The least weasel is the smallest true carnivore on earth and has, gram for gram, one of the highest metabolic rates of any mammal.

Least weasels breed in spring and late summer and can produce up to 7 kits. The gestation period is usually 35-37 days. If disturbed near its nest, an adult least weasel will chirp at its enemy and that sound is a threat cry.

Photo courtesy Hessilhead Wildlife Rescue Trust
The kits are blind and naked, but develop rapidly. Hair covers their bodies in four days; canine teeth erupt at 11 days; eyes open at 26 to 30 days; and weaning occurs between 42 to 49 days, after which they are on their own.

Youngsters reach adult length after about eight weeks, and adult weight when 12 to 15 weeks old.

Females are sexually mature when they’re 4 months old while males are when they reach 8 months.

A male weasel is known as a dog, a buck, a Jack, or a hob while females are known as a Jane, a doe, or a bitch.

In England, groups of weasels can be seen moving around together in early summer. These are usually a mother and her young, out on a hunting expedition which can be quite large due to a good breeding year. 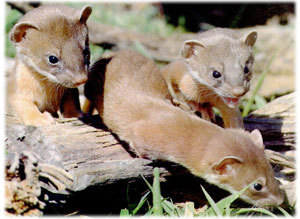 Kits will usually set out on their own once their permanent teeth come through and they have gained some hunting experience.

Thanks to books like “The Wind in the Willows”, which depicts weasels (and ferrets, for that matter) as marauding gangs terrorizing the countryside, these poor little mustelids seem to constantly cop a bad image with the public

Even the collective term for weasels reflects the bad rap they get … it’s a sneak (or pack or gang) of weasels!

See gorgeous pictures of a weasel kit with her cat “mother” which I found on a Chinese site. 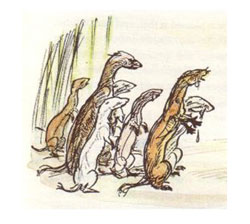 Least weasels have such small stomachs that they can eat only 3g of food at a time, but they have such high metabolic rates that they must eat 10 times a day!

Weasels are active during both the day and night but they seem to prefer to hunt under cover. They will use the runs of mice, voles and moles and are occasionally caught in mole traps.

They eat mainly mice, voles and shrews but will kill and eat any other prey that they can master, including young rabbits, small birds and eggs.

Weasels eat their entire prey and do not suck the blood as many people believe.

Again in England, weasels have been considered enemies of gamebirds and gamekeepers have exercised intensive predator control, trapping and killing many weasels along with other carnivores. Although weasels do kill some gamebird chicks, the total figure is really quite small considering.

They are small enough to be regarded as or confused with prey by almost all other predators; hawks, owls, foxes, cats and mink have been known to eat them.

However weasels are missing from the Isle of Man, the Shetland Isles and Ireland. 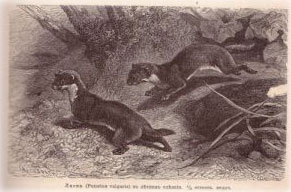 If you live in the UK and you find a stranded or injured weasel, you can contact Mustelid Rescue UK for help.

A reader of this website contacted me a while ago to ask a question about a least weasel she had raised as an orphaned kit.

Unfortunately I couldn’t answer her question but I did ask her to let me know what she did to keep her little one alive and if possible, to tell me the story about Weezie, something she very kindly did.

I was totally fascinated by her story and I know you will be as well – it’s a fabulous tale and shows how deeply a bond can develop between a “wild animal and their savior.

Read the story of Weezie the Pet Weasel here.

Weasels have been around for a long, long time and I think you’ll be surprised at how often they’ve been described in books, etc, since ancient times!

Weasels in Ancient Times
Weasels were buried with humans in Çatalhöyük, the King James Bible talks about weasels and where did the weasels go in Minoan times … ?

Weasels in Ancient Greece
Read all the stories written by the ancient Greeks where they mention the weasel ….

Et tu, mustela! Weasels during Roman Times
Weasels giving birth through their mouth? Childbirth painkillers including weasel fluids? What were the Roman patriarchs thinking of ….?!!

Weasels in Medieval England
The Aberdeen Bestiary kept the strange misconception of the weasel giving birth through her mouth alive, while old Will Shakespeare mentioned the weasel in a number of his plays ….

Weasel Quotations and Nursery Rhymes
Learn about the origins of the nursery rhyme “Pop Goes the Weasel”, as well as seeing who said what about weasels!

Weasel Folklore, Superstitions, Myths & Fables
The poor little weasel – accused of being spiteful and malignant among other things! Read about the superstitions, myths and fables relating to this animal from around the world.

How to Say “Least Weasel” in Other Languages
You never know when you might need to know the word “weasel” in another language …! 😀 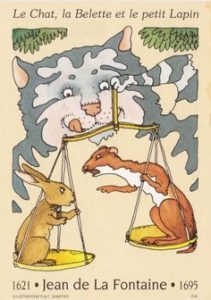 Some interesting websites about the weasel …

Least Weasel Collection
A small but gorgeous collection of pictures of a weasel in the snow.

Weasel Words and Skulking Stoats
This article is great, because it also talks about the bad rap weasels get.

John Schandelmeier: Least weasel is a small carnivore with a big appetite

The Weasels Habitat, History and Habits

Weasels ripped my flesh… (Dan Alexe’s Flea Market)
A cute article about the meaning of the word “weasel” in other languages.

VIDEO: Weasel mama relocates babies with military precision (Earth Touch)
Incredible video showing a weasel moving her kits from one “den” to another in a blink of an eye 🙂

How do long-tailed weasels turn white?

YouTube video of Ozzie the Weasel (a pet weasel!)

Return from Least Weasel (Mustela nivalis) to All About Ferrets