The “fren+” in Mustela frenata is Latin for “rein”, “bridle”, “a bit” so the name refers to the long-tailed weasel’s bridle-like mask (the white line under its chin).

This is seen in weasel populations in the southern United States, but for some reason is absent in weasels found in South Dakota.

The Lakota word for weasel is (h)itunkasan.

Appearance
Long-tailed weasels which live in the northern areas of the US turn white in winter and the last quarter of their tail stays black, which is why they are often confused for ermines. They tend to change color during a 25-30 day molt which starts in early October till early December. During this period they have a piebald appearance.

In the summer their coats are brown on top and buff colored underneath. This change usually takes place from late February through to late April.

Strangely, those weasels in the southern areas of their range stay brown in winter and scientists have found that genetics have a say in whether a weasel turns white or not. They discovered that a captured northern weasel which is taken south still turns white in winter, while a southern weasel will remain brown if taken north.

Like all mustelids, Mustela frenata will let off a burst of strong smelling musk when frightened, angry or during the mating season.

This weasel has a number of different calls it makes, from squeaks to screeches, a trill or even purring when happy.

They are active during the day but are primarily nocturnal. They are also able to swim and climb but not as well as their cousin, the ermine. 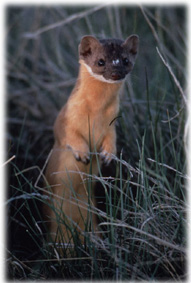 Size
Long-tailed weasels found in Mexico are larger than their northern counterparts.

Its tail is more than 44% of its total body length and the black tip on the tail is relatively longer than the ermine’s.

Breeding
Long-tailed weasels mate in July and August but the fertilized eggs are not implanted in the uterus until 6-7 months later, in March.

The kits are born in April or May and the litter usually consists of 3-9 babies, weighing only 3g (1/16oz) at birth.

Their eyes open around the 35-37 day mark and at 3-1/2 weeks old their baby teeth develop and they are able to eat meat supplied by their mother. They are weaned by the time they reach their 6th week and then leave the nest when they are 10-12 weeks old.

Unlike most other mustelids, the male helps with the care of the youngsters.

Diet
Its diet consists of mice and voles, rabbits, rats, birds and occasionally insects or worms.[wp_ad_camp_2]

Because of its very high metabolism rate, it has to eat about 40% of its body weight every day.

In captivity, the long-tailed weasel has been known to live up to 5 years but only 3-4 years in the wild.

Long-tailed weasels can be found in the following areas – In Canada they’re in southern British Columbia, Alberta, Manitoba and Saskatchewan. They can be found in most of the United States, except for parts of southeast California and Nevada and most of Arizona; and also in Mexico down to Bolivia.

You can find the weasels in bushy or grassy areas near water and they make their dens in hollow logs.

How to say Long-tailed Weasel in different languages

I came across an article on the DesertUSA website ages ago which had a clip about a “wild ferret” which someone found in a cinder block on his property.

I watched the clip and it annoyed me to think that this little creature was called a ferret as that just reinforces people’s misconception that ferrets are wild animals.

However I had no idea what sort of mustelid it was. That was until I started researching the long-tailed weasel and found that it was one!

I confess to being absolutely fascinated by the patterns on the long-tailed weasels’ faces in the photographs. I wonder if they are the start (or the end) of the “piebald” appearance that they go through when changing into their winter coat.

Anyway … the clip is cute, as you can hear the noise that this weasel makes, so it’s worth watching. Just make sure you substitute “ferret” for “long-tailed weasel” in your mind

Click here to see the video clip of the long-tail weasel.

Robert A Hefner Museum of Natural History – the long-tailed weasel

Dancing with Badgers – You Little Weasel

Mothers in Waiting – An odd assortment of animals can delay their pregnancies; how they do so remains a mystery.

Return from Long-tailed Weasel (Mustela frenata) to All About Ferrets