It appears that the name “Vormela” comes from “Würmlein”, an Early New High German word which means “little worm”. Peregusna is taken from the Ukrainian word “pereguznya”, which is for polecat.

So, our marbled polecat should really be called “Little worm polecat”!

Hmmmm – I must say that I personally feel “marbled polecat” is a far better description of our little friend. “Little worm polecat” just doesn’t give it the gravitas the animal deserves 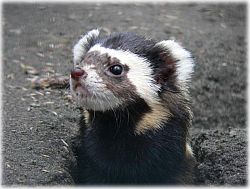 You can see from this photo how the marble polecat’s face is similar to the European polecat, with its short muzzle and stocky appearance.

The mottling on the back is reddish brown and buff yellow/white and the long hair of the tail is usually whitish with a dark tip. The fur underneath is dark brown or blackish while the facial mask is dark brown.

Vormela has noticeable ears which look large, due to the white fur which grows around the top of the ears. The fur on its face is black and white, with a white band across its forehead to below its ears. Its limbs are short and its front paws are strong, which helps it to excavate deep and roomy burrows. It also uses the burrows of other animals as its own den. 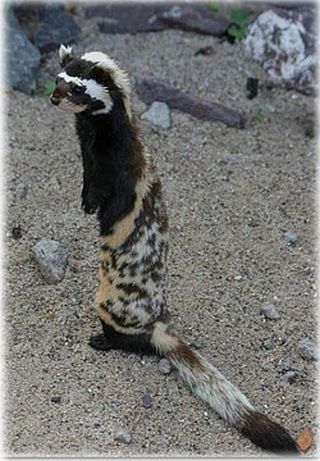 I absolutely love the above photograph – it looks to me like the polecat is dressed in a sari with a funny hat on its head! So incredibly cute!

They’re not particular vocal, giving off grunts and a long shriek when being submissive. However, when alarmed, they give off shrill cries.

If the animal feels threatened, it throws its head back and bares its teeth, while letting out a hiss. It also puffs out its body and tail hairs (like our ferret’s “bottlebrush”!) and curls its tail over its back. 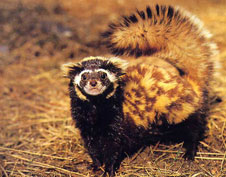 This action makes all the contrasting colors of its fur more vivid and, together with the “stink bomb” is the marble polecat’s warning sign. You could almost imagine it saying, “Back off, buddy, or else ….!”

Again, like so many of its cousins, Vormela is a solitary animal except during the breeding season.

According to Walker’s Book of Carnivores …

“Investigations in Israel found each animal to occupy a home range of 0.5-0.6 sq km; there was some overlap of ranges and there were some encounters between animals but each foraged and rested alone. Observations in captivity suggested that males form a dominance hierarchy. In March, just prior to the mating season, all males that were housed alone underwent a conspicuous colour change – the yellow spots of the fur changing to bright orange patches. However, of the males that were housed in groups only dominant individuals changed colour.

“The mating season in Israel extends from mid-April to early June and some wild males undergo the color change described above at that time. Females kept in captivity gave birth 8-11 months after mating, meaning that delayed implantation is involved.”

A litter size can range between 1 to 8 young and the father has nothing to do with raising the kits. Only the mother cares for the young.

The kits don’t open their eyes until they were approximately 40 days old, however researchers found that they begin to eat solid food when they reach 30 days old. They are weaned when they are 6-7 weeks old and leave their mother soon afterwards, around 8-9 weeks.

By the time females reach 3 months old, they are fully grown and have reached sexual maturity but the males take longer. They keep growing for another 2 months and reach sexual maturity at 1 year old.

The marbled polecat is a good climber but tends to hunt for its food on terra firma.

Its hunting times are at dawn and dusk and its diet consists mainly of desert and steppe rodents – ground squirrels, Libyan jirds, Armenian hamsters, voles, mole rats, gerbils – as well as birds, reptiles and other small animals.[wp_ad_camp_2]

A marbled polecat, caught in the wild, was approximately 8.8 years old before it died in captivity.

The marbled polecat is native to the following countries: 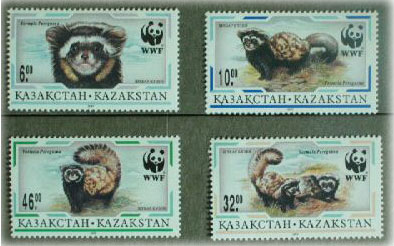 It lives in areas ranging from sea level up to 2000m and is found up to 3000m in the Tien Shan Mountains.

Vormela is classed as “Rare” in Russia and it’s being forced out of the areas in the Balkans, Ukraine and European Russia.

The reason for its decline on the steppes of the Balkans and Ukraine is because its rodent prey has been eliminated and humans have taken over its grassland habitat, much like what happened to the black-footed ferret in the States.

Because the animal occasionally eats poultry, it has unfortunately been eliminated from some parts of the countries where it normally should be found 🙁

Although the animal is less rare in central Asia than elsewhere, it isn’t common in that area.

It’s well known to the local Bedouins in northern Sinai and the largest population in the Middle East is said to be in Israel.

Scientists have studied the movements of the marbled polecat via a tracking device and found that it moves up to 1km every night, it rarely used the same route over again and changed its den and activity area every 2-3 days.

Vormela is active during the night and at dawn and dusk; however it has been known to move around during the day.

How to say “Marbled Polecat” in other languages

It was noted in 1945 that storekeepers in Kabul, Afghanistan, kept marbled polecats to keep down the rodent population.

Although humans have collected the marbled polecat’s fur at times, they haven’t been hunted solely for the purpose of that, unlike mink or sables for instance.

The Marbled Polecat as a Pet

Around the middle of March I had an email from a someone in Kuwait who asked me if I could identify what kind of ferret she had if she sent me a photo of her pet.

Certainly, I said, imagining that I’d get a picture of a very dark sable or perhaps an odd looking silvermitt. Never did I ever think I would sent a picture of a pet marbled polecat! 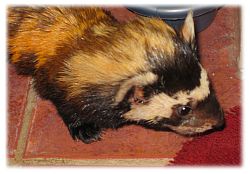 His name is Emo and apparently he has the same sort of behavior as a ferret – jumping around and taking the food from his owner’s hand. He also knows his name, which I think is so adorable.

Nadia, his owner, said that he’s had a distemper shot from the vet and will be getting his rabies shot in April. She was also thinking about having his scent glands removed as, when Emo gets scared or frightened, he lets out the mightiest “stink bomb” imaginable and apparently it really hangs around the house and smells pretty strong! 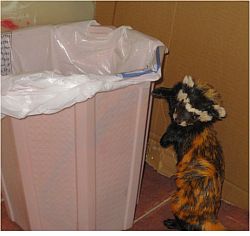 Like you read earlier, marbled polecats have long claws and Nadia said Emo’s nails are really very long. Apparently when he’s awake, he’s hyper active – climbing on the furniture, digging, chewing, and he loves exploring and getting into new places around the room. He also gets so excited when he sees her and runs around her.

He sounds like a real sweetie, and I hadn’t realized how small marbled polecats were. He’s not yet 5 months old and so has another 7 months to go before he reaches maturity, according to the information I posted. 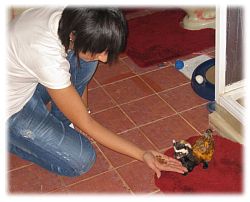 Apparently Nadia had another marbled polecat which wasn’t quite as sweet as Emo. She said he was okay when she first got him but got rather wild and aggressive as he got older. After a visit to the vet he bit her on the hand and drew blood, which was very painful – as you can imagine – and he’d let out the worst “stink bombs” if he got scared so reluctantly she had to return him to the pet store.

I think after an experience like that I would have been very wary about getting another marbled polecat but good on Nadia for persevering as it seems that, compared to her first polecat, Emo is very gentle and loving. 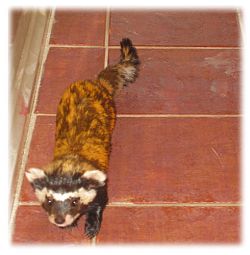 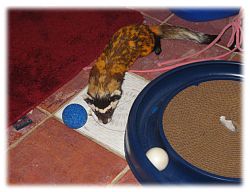 Apparently he eats like a horse now and Nadia is teaching him tricks, using food as a treat, as she says he’s one smart cookie! She’s going to be getting a leash for him and taking him out in the evenings, when it gets slightly cooler, so that he can go for walks.

Marbled Polecat in the wild

I also had a query from someone in Israel who asked me to identify the animal he saw while in a forest and, sure enough, it was a Marbled Polecat.

YouTube clip made by Nachem Doron, Israel. Used with permission

Return from Marbled Polecat (Vormela peregusna) to All About Ferrets