The sea mink is thought to have been exterminated around about 1894 thanks to constant trapping for their fur. It was valuable because of its large size so the pelt fetched a higher price and it was actively sought by trappers.

People were even said to have used dogs to find the sea minks hiding in rock crevices and ledges then digging or smoking them out. 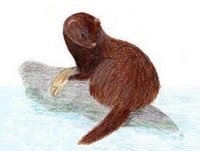 As there is no record of a complete specimen of Mustela macrodon known to exist, the description is taken from recorded observations and the study of the bone fragments and teeth found at Indian middens along the coast of New England.

Said to be a larger and fatter version of M. vison, this animal had coarser and more reddish fur, a slightly bushy tail and had a distinctive odor, which was entirely different to the mink.

However I did see a comment that the zooarchaeological community doesn’t consider that the sea mink was in any way connected to the mink, saying it was distinct from all subspecies of the mink.[wp_ad_camp_2]
Size

It is believed that the sea mink probably ate fish, seabirds and their eggs and mollusks.

Sea Minks lived along the rocky coast from Newfoundland & the Maritime Provinces in Canada down to Maine & Massachusetts, as well as living on offshore islands along that coastline.

It’s believed that their dens had two entrances.

I read a very depressing book called “The Sea of Slaughter” by Farley Mowat, and that had a short chapter about the way the sea mink was hounded to extinction for its pelt.

Farley Mowat, who was born in 1921, is a Canadian conservationist and one of the country’s most widely-read authors. “The Sea of Slaughter” was published in 1984.

How to say Sea Mink in different languages

Return from Sea Mink (Mustela macrodon) to All About Ferrets